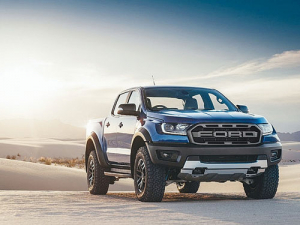 That will change with the spring arrival of the recently announced Ford Ranger Raptor, which the company says will reflect the use of utes as going far beyond the workhorse to a multi-use lifestyle vehicle.

Destined to be the hero model of the Ranger offering in New Zealand, the Raptor builds on the qualities of the American F Series Raptor, but with local development in the You Yangs Proving Grounds in Australia.

Power is provided by a new generation, 2.0L, bi-turbo diesel pushing out 157kW and 500Nm torque, mated to a 10-speed automatic transmission, with paddle shifters behind the steering wheel.

The powertrain also has Ford’s Terrain Management System (TMS) that offers six modes to deal with a variety of terrain, including low and high rear wheel drive and a locking rear differential. The TMS also introduces the Baja Mode for ultimate off-road performance.

That off-road ability is what the Raptor is about, given its long suspension travel with Fox Shox dampers, aluminium control arms, HD skid plates and underbody protection.

The overall layout sees wider front and rear track widths, a greater ride height, increased approach and departure angles and the ability to ford up to 850mm of water.

At the business end, a 1560 x 1745mm rear tray has plenty of space for work and play, and 2500kg towing capacity should be useful for both. Two recovery hooks at the rear rated to 3.8 tonnes and a pair at the front rated to 4.5 tonnes should take care of getting extracted or extracting others from unplanned adventures.

In the cabin, car-like luxury is seen in technical suede seat coverings accentuated with leather and dramatised with blue stitching.