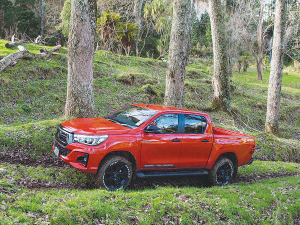 All its New Zealand new vehicle offerings will now have high-spec safety features as standard. So, all Hilux variants -- from the 2WD single cab chassis to the range topping SR5 Cruiser – will have the Toyota Safety Sense (TSS) package as part of a range-wide upgrade.

“The revised Hilux is the first vehicle to be put forward to ANCAP for retesting and is currently the only ute with a 2019 five-star ANCAP rating.”

Using a camera and radar sensors, the pre-collision system is designed to detect vehicles, pedestrians and cyclists, and to give the driver visual and audible warnings, braking assistance or autonomous emergency braking if they fail to heed these warnings. The lane departure alert function will warn the driver with visual and audible alerts if the vehicle deviates from its lane and, if necessary, will use the braking system to create yaw to keep the vehicle within the lane.

Dynamic radar cruise control (DRCC), standard on the Hilux range, uses sensors to maintain a suitable following distance from the vehicle ahead. The DRCC system operates at speeds above 40 km/h.  All Hilux variants will also have a road sign assist system which recognises speed limit signs and displays them on a 4.2-inch colour display now standard in all variants.

Two rear tray options are being made available for the cab-chassis variants. The Toyota Genuine alloy tray has galvanised steel bearers and mounts, and the T Custom steel and timber tray is made of heavy duty galvanised steel with a Transtex industrial plywood deck. Both tray options include mud flaps, mud guards, and tail light protectors.

The former ‘S’ Hilux variants have been discontinued and will be replaced by a new entry-grade model later in the year, and a new PreRunner SR single cab chassis, manual transmission variant with extra cab variants will be available from October.

The nebula blue ute parked on the drive looks the part, but is it up to the undertaking the rigours of a week in cow-country Waikato?