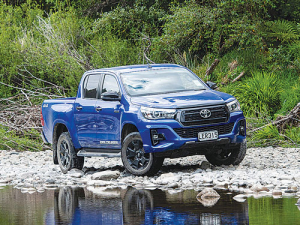 The SR5 Cruiser variants will change to Dunlop Grandtrek AT25 tyres with white lettering to further enhance their looks.

The Hilux was introduced to the Japanese market in 1968 and exports began the following year, with the first Hilux arriving in New Zealand in 1976. Now in its eighth generation, its sales have numbered at least 18 million in 170 countries.

The Hilux was assembled at Toyota NZ’s Christchurch plant between 1983 and 1995. Today it is imported from Toyota’s Thailand plant.

Sales in Australia have exceeded one million.

All variants come with an improved diesel particulate filter (DPF) system, with a DPF switch to manually initiate a burn, said to offer greater efficiency and tailored for NZ conditions.