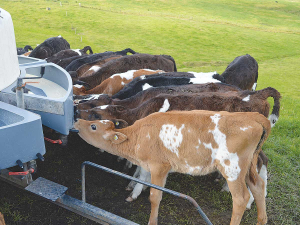 If you have been reading the rural press in recent weeks it’s likely you are scratching your head at some of the claims which have been made about whole or skim milk replacers in comparison to whey-based milk replacers. You may also be feeling a sense of déjà vu.

Much has been made of the importance of curd formation when assessing the quality of milk replacers, but as anyone who has done some reading around the different milk replacers available on the market will tell you, whey-based milk replacers simply do not curd.

Some suppliers of whole or skim milk powder-based products would like you to believe that this absence of curd formation means that whey-based products are inferior, but like most things, it’s not as simple as that!

For over twenty years, leading researchers around the world have been questioning the importance and physiological role of curd formation in milk or milk replacer.

So it is disappointing to see dated thinking and research making its way back into our rural press, with little consideration given to the extensive peer-reviewed and independent research carried out around the world which has been focused on improving our understanding of the health and nutrition of the young preruminant animals and, most importantly, improving animal welfare.

The results of a New Zealand trial carried out in 2004, over 15 years ago, have been used recently to support the argument that whey-based milk replacers are not suitable for young calves.

What the people who refer to this trial as an example of the superiority of casein-based milk replacers don’t tell you, is that there were dramatic differences in the energy content of the skim- and whey- based milk replacers compared in the 2004 trial.

The effect of lower energy intakes on calves which are stressed or subjected to challenging conditions is well known and any good calf rearer will tell you that you that if calves are under fed (for example, if you are using the wrong mixing rate) they are more susceptible to disease challenge. Once again, it’s no surprise that the calves fed on the whey-based milk replacer were more susceptible to Salmonella.

Although the researchers do report in their paper that all milk replacers in the 2004 trial were formulated and manufactured in New Zealand, they neglect to explain the implications of this.

Not only were there dramatic differences between the technologies available in New Zealand and countries such as Netherlands for the manufacture of whey-based milk replacers in 2004, but these differences are even greater now.

The results of a trial comparing products formulated and manufactured in New Zealand in 2004 simply cannot be used as a predictor of the performance under New Zealand conditions of high quality, scientifically researched, whey based milk replacers which are manufactured to extremely high standards in the competitive European and American markets today.

• Natalie Chrystal, is a nutrition consultant to AgriVantage

A series of open days will run in the North Island this month on controlling feed intake of calves and heifers.

Spot cycling cows in a flash and improve in-calf rates

When Shaun Gardner did his homework on full autumn calving last season, he realised he'd need every heat detection advantage.