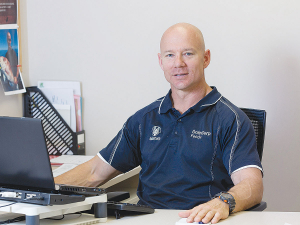 He says the transition period covers the four weeks before and after calving and is a critical time for the dairy cow.

“The transition period is a brief but critically important time when as much as 80% of disease costs are generated and an average 4% of animals have to be culled from the herd,” Calcinai says.

“Farmers know their cows’ demand for nutrients is high at this time of the year. It’s important to set up animals well so they have a smooth calving and minimise the risk of milk fever and other metabolic diseases. That’s what transition feeding is about.”

“It can also help prevent other metabolic diseases such as ketosis, retained foetal membrane and lameness, which in turn reduces cost and lifts seasonal profitability.

“In respect of financials, we often refer to the return on [spend] from feeding the right feed at the right time, and this is particularly relevant for transition feeding.

“Getting milk into the vat earlier to reach high peak milk and holding it for longer starts during that transition period.”

Recently, GrainCorp and animal nutrition specialist Nutritech held a seminar for Taranaki farmers on the benefits of Transition feeding.

“Farmers enthused about the potential of transition feeding for their herd’s health and for saving time and money,” says Calcinai.

“Every farmer has a different feeding set-up. We have a loose product mix that can be added to feed-out wagons or mixed with dry blended feeds on farm.

DCAD (dietary cation anion difference) is a nutritional method of stimulating the cow’s own metabolism of calcium reserves.

Turnips are a brassica root crop commonly used as a fast-maturing single-graze crop to bridge a summer feed gap and maintain milk production.