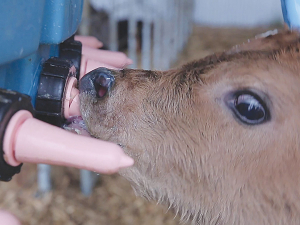 The practice of feeding calves once daily on limited volume of liquid feed is not acceptable for the first three weeks after birth, says NAWAC.

Collier says he speaks to a lot of calf rearers, and he isn't the only one that thinks the National Animal Welfare Advisory Committee (NAWAC) recommendation to ban OAD calf feeding is flawed.

NAWAC is seeking dairy sector feedback on changes to the existing code of welfare for dairy.

It notes that the standard practice of providing calves a milk allowance equivalent to 10% of their body weight has been widely used as a strategy to reduce the feeding and labour costs associated with rearing young calves and as a way of increasing starter intake to promote rumen development and lowering weaning age.

However, calves reared on such restrictive feeding programmes show increased signs of hunger.

NAWAC therefore considers that the management practice of feeding calves once daily on limited volume of liquid feed is not acceptable for the first three weeks after birth.

It has proposed a new minimum standard requiring that for the first 3 weeks after birth, calves must be fed a suitable good quality liquid feed at a rate of no less than 20% of their body weight divided into no less than two feeds per day.

But Collier says that while MPI is suggesting that calves should be fed 20% of their bodyweight on twice-a-day (TAD) feeding, a research paper by James K. Drackley, University of Illinois, contends that ad-lib intakes range from 16% to a high of 20%.

"If calves are barely getting to 20% with ad-lib feeding, how can we possibility expect them to get to 20% on TAD feeding?"

He reminded the industry that the abomasum of a newborn Friesian calf's abomasum holds just 1.2 litres.

“If you tried to give a calf four litres of milk in one feed without probiotic support, most of the milk is going to end up in the rumen – which can trigger nutritional scours,” says Collier.

Collier, a former farm consultant, launched Probiotic Revolution in 2017, refining a high-volume OAD feeding philosophy with the support of powerful probiotics, which includes a live active yeast and 11 biological compounds that support digestion.

He says in its first year, 22,000 calves were reared using Calf Xtreme probiotic. By last season those numbers had swelled to 80,000 in the year.

“We have been working with farmers to help get them to safely feeding a high rate of milk early on OAD using Calf Xtreme. The live yeast we use helps stop those nutritional scours, but of equal importance in this system is that Calf Xtreme also boosts digestion in the developing rumen.

“Helping calves digest meal, hay, and grass early in their life results in growth and rumen development; to the extent that a OAD feeding regime also works extremely successfully within the first week of a calf’s life.

“For many farmers this is a godsend when they are extremely busy in the spring and labour is at a premium.”

In contrast, he noted that calves reared on an ad-lib system often have poor hard feed intake – because of their high reliance on milk. He noted it often results in a check in their weight gain when they are either pulled back to OAD (towards weaning) or weaned.

He acknowledges that the industry all wants the same result and that there is more than one way to get there.

“We all want healthy, fast-growing young calves, because we know through overseas research that calves which are grown faster in the first three to five weeks of their lives will give 10% more protein in their first season.

“I believe that calves should be fed high rates of milk when they are young, but that the MPI should not take a blanket approach to enforce one system on all farmers.”