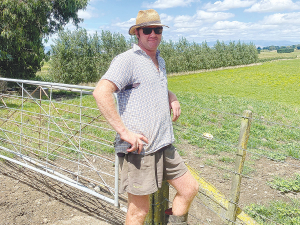 Farmer Gregory Dorn says he has tapped into some excellent Holstein Friesian genetics.

Manawatu dairy farmers Gregory and Brooke Dorn have tapped into some excellent Holstein Friesian genetics to not only raise the quality of their herd’s milk, but to ensure the future of the herd’s best cow families is guaranteed.

Milking 300 cows on 150ha at Rangiotu, under First Hill Dairies, the couple was seeing milk going into the vat, but protein and fat components had fallen away.

“There was a lot of milk, but we were struggling to get the fat content up,” Gregory says.

“Using carefully selected Holstein Friesian bulls, we are now turning that around.”

The Dorns, who also raise beef cattle and young stock on farm, have a 100% pedigree Holstein Friesian herd under Lowland Stud. Gregory grew up on the property, his family farm, and he and Brooke purchased the neighbouring 58ha property in March 2020. Brooke grew up off-farm in Dunedin.

Gregory says they are working towards a herd that reflects their ideal cow.

“When we bought the property next door, we bought some cows from up north; we had a bit of a selection!

“I like having a ‘clean’ herd with no crossbred cows. My uncle bred a few nice, big Holstein Friesian cows and I really admired those cows.”

The herd is in its third season split calving 150 cows in autumn and 150 in spring, a decision the Dorns made to try and overcome a few challenges that arose on farm.

“We were having some fertility problems at the time and split-calving was a way to keep some of our top producers in the herd, rather than culling them,” Gregory says.

“Secondly, it allowed us to grow more maize on our milking platform, therefore increasing kilograms of dry matter grown on farm. Because we have a bit of sand on our property, which doesn’t do well in summer but which we can use in winter, split calving is working well in our system. It also means the cows don’t have to go too far.”

Genetic selection has played a big part in overcoming these challenges, alongside careful management by Gregory. Seven weeks of AI is undertaken from October 20, finishing with bulls in December. Bulls are put over the whole autumn mob from June 5.

With fertility being their number one issue, the Dorns made some very specific genetic selections. “The cows were cycling, but they weren’t holding,” Gregory says.

“We had high empty rates in the region of 20%. So, we now include fertility in the top three criteria by which we make our bull selections. It is still a work in progress, but we managed to reduce empty rates to 14% in the spring mating.”

With milk components also a focus area, Gregory looks for bulls that can develop those traits.

“We were struggling to get our fat percentage up, so the bulls we have been using to try and increase our milk solids recently include Westcoast Alcove and Delta Everton,” he says. “Their progeny are still calves at the moment, so we are unsure of their capabilities just yet. There were also changes we made to our feed sources recently to push fat higher: more fibre and bypass fat.”

With the herd producing around 500 kgMS/cow, Gregory looks for bulls with good udder capacity traits.

“We are pushing a lot of milk through the cows, so we don’t want frail, narrow udders,” Gregory says. “We also look to breed cows with good pin width and height, high udders and a good temperament.”

Calving dates are July 25 and March 15, with 45-50 replacements usually born over the year. However, the Dorns ended up with 60 this season.

Gregory says cows that stand out in the herd include Lowland Police Fia S0F and Lowland Stan Dina S0F EX.

“Dina in particular is an outstanding cow, although Fia is a ripper too,” Gregory says. “Lowland Halak Ren S1F and Lowland Firenze Fia S0F VG87 are also awesome cows. We also have some really nice Ralma O-Man CF Cricket-ET and CRV Delta Paramount daughters in the herd.”

The Dorns use the Semex OptiMate mating programme.

“The in-depth information we now have access to means we can move forward faster,” he says.

Grass growth is fantastic in the Manawatu but production remains static.

Although the national economy is still functioning below pre-pandemic levels and the road ahead remains uncertain, the Manawatu region appears to be bearing up well.

Dairy farms hit by recent floods in the lower North Island are slowly drying out according to DairyNZ.

DairyNZ says it is working alongside other groups to support farmers and ensure that around 5000 cows in central Manawatu and Horowhenua have enough feed for the winter after dozens of paddocks were flooded on dairy farms last week.