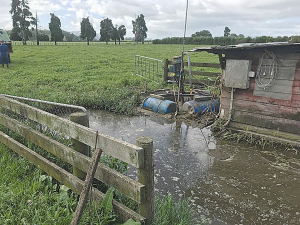 Effluent sump overflowing on the farm.

The case against Pollock Farms was taken by Waikato Regional Council following inspections where over-irrigation of effluent was evident.

The Cambridge farming company and one of its directors were each convicted of eight charges under the Resource Management Act in early March in Hamilton District Court and fined a total of $131,840.

This is the largest total fine imposed for illegal dairy effluent discharges into the environment in the Waikato region since the RMA came into force in 1991.

Effluent from an underpass to an adjoining property was also being pumped directly to land in large volumes.  Both practices pose a real risk of effluent contaminating groundwater.

Similar breaches had been found by the council in 2016 and 2017. Formal warnings and infringement notices had been issued for those breaches and an abatement notice had been served on the farming company in September 2016 to cease the illegal practices.

“This farmer is undermining all of the positive work being done by the wider farming industry and community to improve our environment,” said council investigations manager Patrick Lynch.

“This farm has posed an ongoing risk to the environment for years. There has been woefully inadequate infrastructure on this farm since Mr Pollock first appeared before the courts in the 1990s. Quite simply, he has ignored all of the actions taken by the council to date, as well as all of the messaging from his own industry to improve.”

“Every dairy farm should have sufficient storage to be able to safely store effluent through wet and busy periods, the idea being that when weather and circumstances allow, this effluent can then be irrigated to land as fertiliser in an environmentally safe and economically prudent, manner,” says Lynch.

“On this particular farm the storage was only sufficient for a single day.  It should have been up to 100 times larger than that. With virtually no storage, this means there will have been regular and frequent unlawful discharges of dairy effluent into the environment for years.

“We would have expected Mr Pollock to have changed his practices following his first prosecution. Unfortunately, it has taken numerous enforcement actions, including three prosecutions and finally a court order, for that farm to ultimately get to a good place.

“This is a very significant fine. It is a clear message to those poor performers in the dairy industry that they need to change their behaviour, as the courts, the public and even their own industry has lost patience with them,” Lynch said.

All dairy farmers have a responsibility to manage the effluent from their cows and this is taken seriously by the vast majority of dairy farmers.

Most dairy farmers are investing in reliable, sustainable farm systems.

All farmers need to be aware of, understand and adhere to permitted activity rules.

For farmers who haven’t yet undertaken the work needed to meet their obligations, advice is available from dairy companies and regional councils. DairyNZ also has an environmental extension specialist whose role includes working with farmers, rural professionals and others to help farmers understand their effluent management requirements and how to meet them.

DairyNZ resources available to all dairy farmers include a Dairy Effluent Storage Calculator, A Farmer’s Guide to Building a New Effluent Storage Pond and a certification scheme for accredited effluent system designers. Farmers looking for support in establishing effluent infrastructure can visit the DairyNZ website – www.dairynz.co.nz/effluent