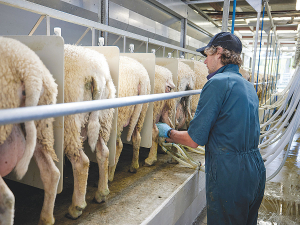 Sheep milking is a growing industry in New Zealand with a 50% increase in sheep producers between 2019 and 2021.

Cited as sustainable and good for the environment, farmers and scientists see sheep dairy farming as a solution to reducing nitrogen (N) leaching and greenhouse gas (GHG) emissions. At the same time, sheep milk has a unique compositional and nutritional profile that makes it an ideal food source.

Clean and green, quality farming systems, being environmentally friendly and profitable and innovation are all the things that enable New Zealand products to fetch a premium worldwide.

NZ Crown Research Institute, AgResearch, has been heavily involved with Sheep Milk NZ to determine the environmental footprint of sheep dairying with a specific focus on N leaching and GHG emissions.

N leaching is the loss of nitrate as water drains through the soil profile, moving out of the range of plant rooting systems. It is recognised worldwide as an envvironmental and economic concern. In New Zealand, agricultural systems have been identified as a significant contaminant source to underlying groundwater and surface water bodies. Nitrogen can also be lost via gaseous admissions (e.g. nitrous oxide) to the atmosphere.

Studies in 2017 and 2018 looked at N leaching on farms near Taupo in the North Island and Telford in the South Island. There was 50% more pasture growth and N cycling in the sheep treatment compared to cow farms. They attributed this to less compaction of the soil and more even spread of urine. Urinary N extraction (kg/ha) was 50 percent less for sheep than cows too.

AgResearch has stressed that these were preliminary findings and that further testing was needed.

To address GHG emissions, the other major environmental challenge for farmers in New Zealand, AgResearch compared two cow systems with five sheep dairy systems. It showed that dry matter intake (production intensity) was the key driver of GHG emissions. And, whilst emissions per kg milk solids were similar, with a significantly higher return per hectare from sheep dairying, less intensification and reducing farm GHG emissions is possible.

Fresh water is another important environmental issue for New Zealand. With livestock intensification and the need for high-producing pastures, farmers have resorted to using large amounts of fertiliser. Increased amounts of nitrate have ended up in waterways. Dry, hot summers result in an increase of algal blooms, which affect oxygen variability and creates oxygen extremes. Low and high oxygen extremes are lethal to life in the waterways. New Zealand scientists believe that if sheep milk has a smaller footprint on water quality than traditional New Zealand dairying, then the time is right for diversification.

New Zealand farmer Rhys Darby is a recent convert to sheep milking – switching due to the increasing environmental pressure on traditional dairy.

With GEA’s support, he has successfully converted a 36-a-side herringbone traditional dairy parlor into a 42-a-side sheep milking parlor with rapid exit stalling.

With clever stalling and cluster solutions, they milk in half the time that other farms do.

Rhys set up his sheep milking operation in June 2020 on the family dairy farm, west of Huntly in the Waikato.

Starting out with 600 ewes, he has plans to expand to a flock of 1200 and pay back the new installation in just 3 years.

Maximising ease of use and considerable time savings at cups-on, the TopFlow S is practical and gentle for the animal, while providing an uninterrupted, smooth milk flow that comes without the use of a claw. In-shed feeding and automated plant wash technology further contributes to better efficiency in Rhys’ shed.

“We get excellent throughput, roughly five minutes per row. So, we’re milking 600 ewes in just over an hour.”