Dairy farmers dig in for the environment 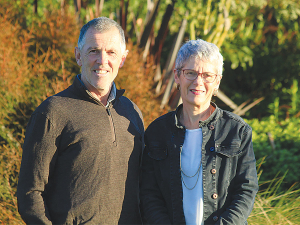 For the first two years, the McDonalds got funding from ECan which helped to get the project on its feet.

They started in 2009, planting New Zealand natives along 300m of road boundary to quell the dust from a shingle road.

The following season, they planted the margins of a 1km spring fed stream crossing their farm on its way to the Ashburton River.

They first planted Kiwi standards toetoe, flax, carex, pittosporum and coprosma. They’ve since added kaikomako, pokaka, kahikatea and pseudopanax. And kowhai, totara and beech have been planted for their wide ground cover and low maintenance.

“It all helps to keep the cost down, and it’s rewarding to collect seeds from the foothills and grow them into trees. And there’s always friends donating seedlings that have popped up in their gardens.

“We also got involved in the Carex Project, a collaboration between ECan and the University of Canterbury, who came to sample water quality each month.  The project was to create a set of tools for farmers to use to improve water quality and eco systems in freshwater streams across Canterbury. It was an excellent project to be part of.”

Six years ago the McDonalds decided to develop a small wetland area that had been unsuccessfully tiled some years before. A digger removed drainage pipes and exposed the springs prevalent in the area. A lot of hard work followed.

“We shaped up a pond in one section and contoured the rest. The area was fenced and with help from Ashburton College students on work experience we planted the same basic species,” says McDonald.

They are now seeing a lot of self seeding which provides a source of young plants that can be transferred to other areas.

McDonald says it’s good to see all their hard work starting to pay off.

“We’re starting to see better shading of the stream which has reduced the number of weeds. The stream is home to eels, trout and bird life, and while they’re still mostly introduced species, I’m sure before long we’ll hear bellbirds and tuis on the farm.”

The McDonalds have completed planting along most of the farm’s waterways and are now set on developing two other wetland areas close to the northern branch of the Ashburton River.

“One is covered in willows, and we’re using the existing cover the willows provide to plant kahikatea, matai, totara and beech. Once these trees get established we will poison the willows and cut them out,” says Mark.

“The other area is a low lying one better suited to flaxes, grasses and sedges. We are also in the early stages of restoring a support block near Mayfield which has a significant stream dissecting it.”