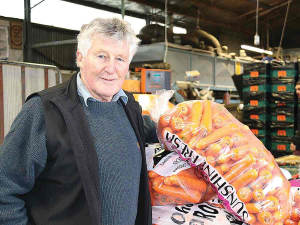 The Frew family in Ohakune have arguably the largest milking platform in New Zealand – some 4000ha – yet run only 700 cows. The question is why? Peter Burke explains.

The Frew family partnership is based in the small central North Island township of Ohakune, the carrot capital of New Zealand and the gateway to the popular Turoa ski field. On a clear day Mt Ruapehu provides a majestic backdrop to much of the land owned by the Frews.

After obtaining his degree at university Ron Frew came back to the family farm and in 1967 grew his first crop of carrots. Forty years later add to that dairy farmer.

Frew and his family now grow about 20ha of carrots which they sell to Fresh Direct in Auckland and to Speirs in Marton.

They are also big potato growers with normally about 100ha planted annually. All their potatoes are washed and supplied to the Foodstuffs chain with its various supermarkets. They also sell to independent retailers.

But that’s not all. Frews also run a large sheep and beef operation – 25,000 breeding ewes and 530 breeding cows. And they raise calves. A relatively new addition is dairying, which they took on about seven years ago.

“We were initially buying the land for cropping but it was a dairy farm and we were going to convert it out of dairy,” says Frew. “But in the end it didn’t make sense because we would have been faced with fencing the whole operation for sheep and building a woolshed. So we decided to stay with dairy and it is much more profitable than sheep.”

The dairy farm is located 5km north of Ohakune on rich free draining soils. When they bought the dairy farm it had a 40 bail rotary and was running about 600 cows. Production was about 270,000kgMS.

But Ron Frew and his family don’t do things by halves and are now in the final stages of building a $2 million dollar dairy shed with all the bells and whistles. One challenge has been setting up the new 54 bail rotary. The land is low and the shed site required building up with rock from their quarry.

Says Frew, “It has all the modern technology -- automatic cup removers, teat spray, you name it. We also have CowScout neck collars on every animal to monitor eating times and it has an alert function which tells us quickly if a cow is exhibiting feeding or health problems.

“The shed also has systems that draft cows on heat or have health issues into a vet area.”

This technology and improved genetics is aimed at increasing the per cow performance and overall production. The family employs a contract milker and two other staff on the dairy farm

Frew could not tell us the actual size of the milking platform because it varies. The carrots and potatoes are only grown for a year or so in once place and then the land is put back into pasture. There’s a bonus for the animals in this: during the carrot and potato harvest they get a change of diet -- the reject carrots and potatoes.

Another dimension to this amazing large family enterprise is the growing and sale of hay to farmers in Waikato.

Tightened US rules an opportunity

OPINION: The updated US Department of Agriculture (USDA) rule for “grass-fed” or “pasture-fed” milk or meat is very restrictive.

Farmers in drought-ravaged Waikato are now dipping into their winter reserves to feed cows.

What should you do when your milk fat percentage has fallen?

Feed budgeting is the big issue for Southland farmers coming out of the early February floods, according to Ollie Knowles, DairyNZ regional leader for Southland and South Otago.