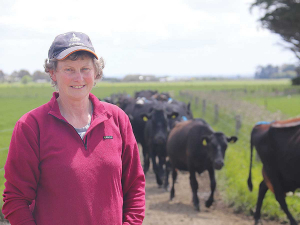 A leading once a day (OAD) farmer says her farm is set to have a record year thanks to a combination of favourable circumstances – especially the weather.

Christine Finnigan who farms near Rongotea, Manawatu says the warm winter has seen good pasture growth into spring and her 220 Kiwi cross cows are in good condition.

She says the original target for this season was 78,000kgMS, but says if conditions stay favourable the record of 82,500kgMS could be reached.

Her son Kieran works full time on the 85ha farm which is a mixture of Tokomaru silt loan and sand. The clay soil is tile and mole drained, but the sandy ridge area gets dry as the summer hits. There is no irrigation.

“One year we didn’t have any rain for eight weeks and the sandy ridges dried off so badly that we had to re-grass them,” she said. “We have had to do this on other occasions as well because they will not recover from a severe drought.”

The Finnigans make silage every year and have already taken one cut this season and those paddocks have already bounced back well with the pasture in outstanding condition. They buy in maize silage and a little PKE to deal with any emergencies. But this season has been a boomer.

Finnigan has farmed here for most of her life and converted to OAD eleven years ago. She is highly regarded in the OAD fraternity and is a ‘dairy connect person’ for DairyNZ, meaning she often fields enquires from farmers thinking of switching to OAD.

With the benefit of experience and her ongoing quest for knowledge, it is no surprise Christine Finnigan has had a good season. She is well aware of the special challenges OAD farmers face.

“With OAD, the cows stay in milk longer, but due to the compressed calving period there is a risk of a feed shortage in early spring. Having said that, in tough seasons our cows tend to get in calf better and if they suffer a problem they tend to bounce back faster than cows on twice a day (TAD).

“For us the critical time of the season is late August to early September because that is the time when pasture growth can be variable.”

To that end Finnigan turns to a spring rotation planner to manage available pasture. Pasture residuals are targeted from day one of milking to manage quality and production.

“So that’s the key: quality and quantity,” she said.

Turnips are grown on the farm to deal with the summer dry and in the first week of February all cows are pregnancy tested and empty cows are sold to save the pasture for productive animals.

Cows have been weighed to improve accuracy of selection for OAD. This has aided OAD research by Nicolas Lopez-villa Lobas of Massey University.

Finnigan is a great believer in data.

“I just don’t know how you can make decisions without information, but you have to make sure it’s the right information. There is a lot of pseudo-science out there.”

Cows end up with good condition

The pros and cons debate about OAD is ongoing and for many who contemplate a change from TAD the risk of an initial drop in production immediately surfaces.

OAD farmers will argue over time, and depending on circumstances  production will come back to an acceptable level and any drop will be outweighed by the benefits.

For Christine Finnigan profitability is the real issue.

“The thing about production is that you can see it every day whereas with profitability you have to look at your accounts so it’s not right in front of you every day. It’s a big picture  thing so it’s hard to judge on a  daily basis how you are going profit-wise other than the fact you know the cows are up or down.”

Finnigan says OAD provides flexibility and gives the farmer and cows a buffer to deal with unforeseen situations. She went to OAD when her three children were in their teens and this gave her time to do family things.

She acknowledges that moving to OAD is a bold move and for everyone it is different. For example, OAD can suit what she describes as ‘difficult farms’. Finnigan says there is a lot more pressure on dairy farmers in the paperwork and compliance required and OAD helps make time for that task.

Tiredness is a big issue for dairy farmers, especially at the peak of the season, she notes.

“OAD is physically more manageable and is kind to people and animals. In spring, not only does the cow end up with a good condition score, so do the people.”

The organiser of last week’s once-a-day (OAD) milking conference in Palmerston North says he is stoked at the turnout.

Blazing the trail for OAD Jerseys

Converting a sheep and beef farm to dairy and going once-a-day milking has proven good decision-making by Jersey breeders Matthew and Emma Darke of Aria, Waikato.

Milking frequency can be adjusted in a number of ways during a season, or part of a season, to become more efficient, reduce farmers’ hours in the milking shed and improve their lifestyle.