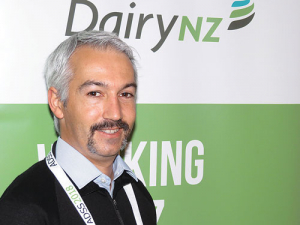 For example, a video on OAD on the DairyNZ web site has been getting lots of hits, Edwards says.

Despite its 14-minute length, about 23,000 people have watched it, making it the fourth-most-watched DairyNZ video on YouTube.

“This shows the interest in OAD or variations on twice-a-day (TAD) milking. People seem to be looking for something a bit different,” he says.

Edwards says the latest data shows that about 9% of dairy farmers are doing OAD for the full season, about 52% are full-time TAD and the remainder are doing variations on OAD, including using it tactically towards the end of the milking season or for part of the herd.

He says interest in OAD has been building, with the low milk price some years ago prompting some farmers to go OAD because they felt they had nothing to lose.

“We have seen OAD tracking from 5% up to 9%. You have many more conversations starting to happen and people are starting to ask questions and that interest level increases. We have gone from historically running three OAD discussion groups NZ-wide to seven in the 2016-17 year, so there was enough interest that every region was able to run its own OAD discussion group,” he says.

Farmers are converting to OAD for many and varied reasons. For most it’s lifestyle – a chance to spend more time with the family but still make a good living and perhaps run the farm better. It may also be the nature of the farm itself where OAD better suits the soil or contour of the land and the physical location of the property.

Edwards said, at the Australasian Dairy Science Symposium, that farmers whose cows are producing under 300kgMS/cow would be likely, on OAD, to incur relatively small production losses -- normally under 10% -- which can be offset by a decrease in running costs.

But where cows are producing more than 300kgMS, the production loss could be about 15%, which may be harder to justify in some circumstances (e.g. farms with large fixed costs such as irrigation).

“For me as a researcher it gets hard to value some of the benefits because it becomes very subjective.

“I can’t get up there and say ‘by saving X amount of hours a day or getting this flexibility, then that should be worth X dollars to you’.

“Putting a dollar figure on lifestyle is challenging. Although it is useful to look at it backwards and add up all the likely savings and change in production to get a balance of X if you go OAD and then the individual can judge whether the intangible benefits are worth that much to them.”

A trend clearly emerging in dairy farming is reducing the number of milkings at various times and in various ways from about the start of the new calendar year.

Paul Edwards says, for example, farmers with two dairy herds may put one on OAD after Christmas and keep the other on TAD. Others are opting for three-and-two milking which is effectively milking cows on average every 16 hours, though in practice intervals range up to 18 hours.

“Milking exactly every 16 hours has the disadvantage that you end up with a midnight milking. Some people like this because they can go home and spend the evening with the kids and then go out and milk but probably for most people that is not very appealing.”

Other options need to be explored more, but hard data is lacking. There are only two published studies on three-and-two milking and DairyNZ is seeking funding to do more research in this area.

Edwards says in Canterbury about 30% of dairy farmers are using three milkings over two days already in the latter months of lactation.

“There is certainly the appetite for this here but the question is how early can we go to that system without compromising production?”

One benefit often discussed in OAD groups is whether farm working expenses can be reduced by milking once a day.

Paul Edwards says some obvious cost savings can be made at the milking shed, but these are only a small percentage of overall costs.

“By digging into the data on the animal health side of the business there was a bit of a difference with fewer animals, health and breeding expenses under OAD. And repairs and maintenance (R&M) should in theory be less if you are walking your cows less on the tracks and running the bikes less.

“My gut feeling is that after going OAD people have more time available and have a chance to fix all those things that have been broken for years and they now have time to spray weeds in the back paddock. So as a result of this, R&M doesn’t decrease in the short term.”

Farmers may over time get their farms in order, but there is no long term data to back this up yet.

The big expense category that OAD clearly can affect is labour. Analysis of DairyBase data indicates those that were in the lowest quartile for labour efficiency increased profitability by 23% after going OAD. The next quartile maintained profit, while surprisingly some herds decreased labour efficiency after adopting OAD, resulting in a decrease in profitability.