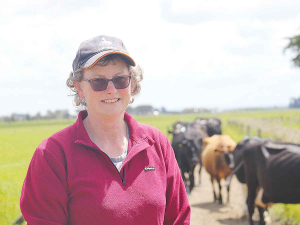 Consulting officer Gray Beagley says this shows the huge interest there is in the topic. He says over 80 people joined the webinar, but he points out that in many cases there were multiple numbers watching on each computer, including many farming partners and staff.

“We had lots of others who couldn’t get on and I have sent a video of the session to at least a dozen people. The webinar was staged because we couldn’t hold the annual OAD conference in Nelson in April due to COVID-19.

“So we put together some topics that we thought would interest a wide group of people and that certainly proved to be the case,” he says.

Beagley says one of the key areas of interest to OAD farmers is having a cow that is best suited for their needs. He says they know what these requirements are and says it’s up to the breeding companies to listen to farmers.

Beagley says part of the problem is that the further down the journey people are in terms of OAD, the harder it becomes because they have more options for culling criteria and policies.

“What came out of the discussion was the value of breeding worth (BW). It is clear that a cow that has good BW will perform well in both the twice a day (TAD) environment and in the OAD environment. But as well as having good BW, OAD cows need to have other traits such as being able to hold milk in their udders for 24 hours,” he says.

This issue of selection was addressed during the webinar by Taylor Connell who’s a sire analyst at LIC. His role there is to focus on breeding and purchasing decisions for Holstein-Friesian, Jersey and KiwiCross bulls. This involves selecting potential bull dams based on several factors, such as BW, genetic diversity and Traits Other than Production (TOP).

He says not all cows can cope with OAD milking and the OAD selection index they have developed is designed to help farmers identify Alpha bulls that are more likely to produce daughters suitable for OAD milking.

Connell says some of the traits that OAD farmers have identified as being important include udder support, milking speed, body capacity and front teat placement.

“The OAD index is being refreshed annually with a view to what’s happened and what might happen in the future. We want cows to be able to persist throughout the season. We don’t want fat, lazy cows who turn the taps off around Christmas. We want them to keep going right though to May,” he says.

Connell told those on the webinar that he would welcome feedback on traits that LIC should be looking for in the future.

One of the keynote speakers on the webinar was OAD farmer Christine Finnigan. She is ‘dairy connect person’ which means that she often fields questions from people thinking of transitioning into OAD milking.

Finnegan told the webinar that their criterion for a good OAD cow is one that is easy care.

“We want to keep the farm simple. We run between a system two and three and while l love the farm I don’t want it to be too complicated. The easy care cow is one that’s easy to cup,  one you don’t notice in the herd, not slow, she doesn’t get mastitis, produces well,  milks all season, we can keep her for a number of years. It’s also important that she gets in calf,” she says.

Finnigan is a great believer in BW cows because she says they will do whatever is asked of them – be it in a system one or five. She says they are flexible and that’s important.

Finnigan also pays close attention to culling animals, ranking them and carefully selecting the animals she will keep and those that she will sell. They have a 20% replacement policy and issues such as somatic cell count come into play. She DNA tests calves to make sure there is no guesswork in the selection process.

Beagley says there wasn’t enough time during the webinar for all the questions to be answered so these have been sent to Taylor and Christine to respond to. He says it is likely that another such webinar will be held in the future on topics that are of interest to everyone in the country.

However, with the rules around COVID-19 being relaxed, DairyNZ is planning to stage a OAD webinar at No.1 Dairy farm at Massey University on June 18.

The first sixty days of a calf's life is crucial.