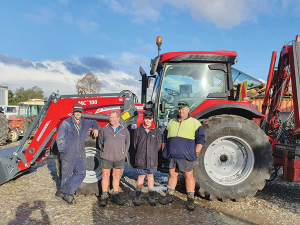 Left to right: The Sturgeons from Motueka Farm Machinery and the Leas’ from Lea Contracting.

Purchased in May 2019, from local dealer Motueka Farm Machinery for work in his fencing business, the red tractor was quite familiar to James – having previously run several of its Landini stablemates for his company Lea Contracting.

Having looked at other brands before buying, the combination of the deal offered by Motueka Farm Machinery – alongside the fact it had taken a Tractor of the Year Award in 2018 and the bonus of CVT – meant it was too good a deal to pass on.

The machine has now completed more than 300 hours – much of those hours in steep, rugged country.

“I can honestly say it’ll climb anywhere I’m prepared to go,” Lea says. “It’s making us 10 to 14% more efficient than previously – as we’re right on the spot every time.”

Mated to the frugal Tier 4 FPT engine, the VT-Drive transmission combines hydrostatic and a mechanical section, where lower speeds of up 4.0 km/h are taken care of. Where the mechanical part of the transmission is progressively taking over as speeds increase to minimise power loss.

For driving the tractor, the operator selects either forward or reverse, with a familiar shuttle lever, before using the joystick or accelerator pedal to increase or reduce travel speeds. Engine revs and transmission ratios are automatically balanced by the electronics – according to the load on the tractor.

When a fixed engine speed is needed to operate a PTO-driven implement or a consistent ground speed is required, appropriate modes can be selected that control the system to manage the powertrain accordingly.

Lea uses his new X6 VT drive to run a heavy-duty post driver for his fencing work and likes the stability of the combination. Additionally, a Manip front-end-loader carries fence posts and a spinning wire jenny.

The tractor is particularly well-suited to loader work, as the power shuttle delivers seamless directional changes. Meanwhile, the high output closed centre, load sensing hydraulic system has more than enough flow for the post hitter and loader to work in tandem.