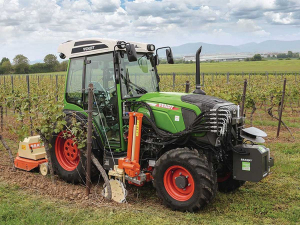 While the local dealer may have a substantial influence on the potential purchase because of service and parts support, there are several other areas that might focus the attention.

Of course, the tractor’s dimensions will always play a part in the eventual choice, but will depend on the row spacing in individual vineyards, or the need to deal with different spacings in multiple blocks. Alongside physical dimensions, it also pays to look at the tractor’s wheelbase (the distance between the front and rear axle centres) and the maximum turning angle of the front axle. In these cases, the former will dictate the overall turning circle, while the latter, typically ranging from 50 to 60 degrees, will influence the ability to emerge from a row and travel down the next, or maybe skip a row or two to get back into work.

So, after deciding that the tractor will “fit” in the vineyard, what other considerations should be looked at before a potential purchase? Given that a typical vineyard tractor will spend a lot of time on power take off (PTO) driven duties like spraying, mulching or topping, it’s worth spending a little time looking at engine characteristics and their relation to PTO speeds.

While manufacturers will talk in mysterious terms, like torque back up, usually expressed as a percentage, this item taken alone only tells part of the story and can be misleading. As an example, let’s look at two 90 horsepower tractors (A or B) that have rated speeds of 2,500 and 2,200 rpm respectively. Tractor A develops 300Nm torque at 1,400rpm, with tractor B developing 350Nm at the same speed. At rated speed, tractor A has a torque value of 200Nm while tractor B shows a value of 320Nm torque. Given that torque back-up is expressed as a percentage of the torque at rated speed to that of maximum torque, Tractor A will be a higher number (200 to 300Nm equates to a 50 percent back up as the tractor drops 1100 rpm). In the case of tractor B (320 to 350Nm equates to only 10 percent as the tractor drops only 800 rpm), so tractor A will have a higher torque back up. Reality tells us that although tractor B exhibits a lower torque back-up, it only loses 30Nm of torque, so is likely to hang on for longer as the engine revs reduce, meaning there is no need to change gear.

Looking at PTO speeds in more detail, its vitally important that the tractor can “hold” the PTO speed irrespective of load, undulating ground or slopes. Not doing so runs the risks of sprayer pump speed dropping resulting in poor atomisation. As PTO speed works at a fixed ratio to engine speed, it is important to choose a tractor that offers PTO speeds at similar engine rpm to that of rated power. Other features to consider are the choice of single or twin PTO speeds (540 or 1000rpm) and economy (E) versions of the same systems. E options allow reduced engine revs for light duty operations, alongside the bonus of reduced engine noise.

Following on from PTO speeds, a wide range of ground speeds or gears is also high on the wish list. While CVT transmissions address the issue by offering stepless speed control, most viticulture tractors still use conventional drive trains. While a base tractor might offer 15 forward speeds, it is more important to understand how many of those speeds lie in the working range of 3-12kph. Upgrades in transmission spec can often double up that offering to 30 forward speeds, or in some cases up to 60 choices. As an example of the need for a wide choice, its worth remembering that a drop from a target speed of 4kph to 3.7kph will result in an over-application of 8 percent, while dropping to 3kph means a 33 percent over-dosing.

Similarly, more intensive operations may want to tackle multiple tasks during each pass though the vineyard, resulting in a need to understand the hydraulic configuration and maximum flow rates of the tractor.

In every case, ensure that the power steering system is run independently of the hydraulic circuits to ensure an adequate flow during manoeuvring. High flow rates will be needed for the likes of trimmers or pruners, particularly if they are used in conjunction with linkage mounter mulchers.

While 50 litres per minute flow will cope with most operations, the option of upgrading to as high as 70L/min should be considered. Also take a look at the configuration of the hydraulic circuit and understand if it is a single, tandem or multiple pump setup. In the case of the former, remember that when a hydraulic spool valve is operated, the oil will take the least line of resistance, meaning adjoining valves might see reduced flows or even total oil starvation. In this case, look for systems that have priority circuits to which key implement functions can be connected. At the same time, consider the likes of centrally mounted valve banks and in-cab joystick controls that will make the fitting and operation of front mounted implements so much easier.

Croptide - getting smarter with water

A stem-to-cloud tool that transmits plant water health to a grower's phone is "the way of the future", says a…