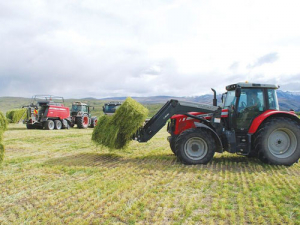 A key part of David O’Neill’s contracting business is the 8 Massey Ferguson and 7 Fendt tractors that make-up his fleet.

Omarama Contractors David and Prue O’Neill (t/a David O’Neill) offer cultivation, baling, silage, direct drilling and mulching services and at the height of the season employ up to 22 staff.

A key part of their operations are AGCO tractors – eight MF and seven Fendt.

O’Neill first bought Fendt tractors in 2006 and added six more over time. He likes them for their reliability and 50km/h road speed that makes them ideal for 110km trips to outlying clients. These are mostly sheep and beef farmers with paddocks on the flats, usually large, so O’Neil uses wide implements like a 5m direct drill, typically pulled by one of the Fendts with its 240-270hp.

Latest additions are a Fendt 824 and Fendt 927, the latter pulling a 5m direct drill on as much as 3000ha per season before spending the winter pulling a 4.5m cultivator.

O’Neill likes the 120L/min hydraulic oil flows, ideal for powering the hydraulic fans on the air-seeders which run for up to 16 hours per day.

Also favoured by O’Neill and his operators are the comfortable cabs on the 900 series tractors, whose independent front suspension gives an unrivalled ride.

All the Fendts have front linkages that run triple mowers and push-off stackers and carry front weights.

Summing up the move to Fendts O’Neill says you can drive a Fendt and not worry about the computer stuff and settings.

“Just drive it like a manual car. It’s easy to get a driver started on them and then teach them the fancy stuff later; you don’t need to be an astronaut to drive a Fendt”

AGCO Australia and New Zealand has announced plans focused around protecting the welfare and livelihood of its customers, employees and the community during the COVID-19 pandemic.

AGCO Australia and New Zealand has announced plans focused around protecting the welfare and livelihood of its customers, employees and the community during the COVID-19 pandemic.

Battery-powered tractors still a way off

The likelihood of electric or hybrid powered farm tractors still appears a long way off.