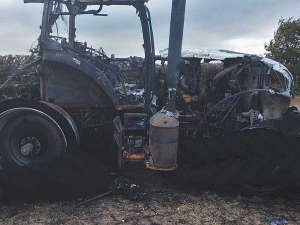 Most of the claims for tractor fires caused by bird nests.

It is now encouraging machinery operators to remember to ‘Stop & Pop’ the bonnet and check for birds.

“Starlings in particular, have the ability to find their way into the smallest of entries to build their nests, and they do so very quickly. With the availability of dry grass on farm, which is the birds’ preferred nesting material, we know that they can build a nest in less than the time it takes to eat your lunch or have a cup of tea,” says Stephen Cantwell, FMG’s manager advice.

Cantwell says most of the claims for tractor fires caused by bird nests coincide with the starling breeding season, which runs from September through to December. Over the last three years, 142 tractor fires claims were the result of birds’ nests, accounting for 38% of all tractor fire claims over that period.

He also notes, even quad bikes, side-by-sides, cars and utes aren’t immune from a bird determined to build a nest, so recommends that owners and employees check for nests under the bonnet each time they start up any machinery. FMG also suggests it might be useful to leave the bonnet in the raised position when a tractor is parked up to discourage birds from nesting in the first place, while also recommending the fitment of an easily accessible fire extinguisher.

FMG’s long-running campaign, ‘Stop & Pop’, reminds operators to check the engine before getting back to work. Free ‘Stop & Pop’ stickers to help remind busy farmers and operators to make the check can be ordered at www.fmg.co.nz/campaigns/stop-and-pop.

UK rural insurer NFU Mutual reports that overloaded battery terminals are behind an increasing number of tractor fires, in 2019, paying out £19 million ($37m) relating to the issue.

An investigation into around 1000 claims found a common factor was electrical accessories wired directly to the tractor battery cables, that when combined with the heavy current drawn from modern tractor electrical systems, can create extra loads that can lead to overheating and fires.

“However, we also found that some relatively new tractors were involved, which upon investigation showed that resistive heating of the battery terminal was the cause.”