Marine grade fence tape hinge in for the long run 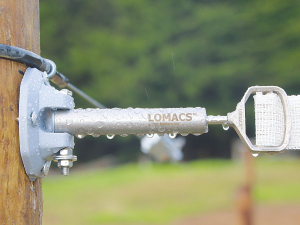 He got frustrated with the quality of plastic spring loaded handles used to set electric fence tapes across gateways and farm races, so he decided to come up with something better -- the Lomacs gateway hinge spring launched at National Fieldays.

Alex’s son, Michael Macmillan, says the product is “unlike anything else on the market”.

“We have lots of interest from farmers in coastal areas who are tired of replacing their gate components every couple of years because of rust. We’ve also had interest from Tasmania and Victoria,” he said.

The unit has a 316 marine grade stainless steel body holding the spring mechanism, protecting it from dirt, dung and other contaminants.

The mechanism keeps the tape under constant tension, with the added benefit of allowing it to swivel in response to deflection by animals.

The insulated mounting is fastened securely to the post by four screws or nails. It has a pivot bolt to which the electrical feed can be secured.

The unit’s high-grade components prevent rust to it outlives less expensive plastic items by many years. And whereas the plastic ones deteriorate in UV light, these don’t. Neither do they get smashed by cattle, people and vehicles. Price $32.

One of LIC’s longest-serving bulls has reached the achievement of selling one million semen straws, just in time for Father’s Day.

Beefed up for dairy

In what is a significant shift forward in the animal welfare space, dairy farmers are more focused than ever on reducing the number of bobby calves leaving their properties.