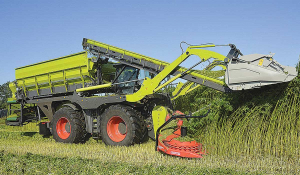 With hemp production expected to increase in New Zealand over the coming years, it might not be too long before we see some strange looking machines out in the paddocks.

In Holland, Dutch hemp grower Dun Agro has three specialised machines that harvest the valuable flowers and upper leaves separately from the lower stems, all in one operation.

Based around Claas Xerion systems tractors, with plenty of heavy-duty componentry to deal with the “tough” crop, the layout sees a high-level Shelbourne Reynolds stripper header working ahead of a 6.0 metre / 4 -rotor Kemper unit, at speeds of up to 10kph.

The first two units, a leaf storage bunker is mounted on a rotating frame, that is swivelled hydraulically to discharge to the side. This allows them to discharge directly into trailers, although some care is needed around field perimeters to avoid becoming entangled with overhanging trees.

The newest version gets a 38 cubic metre bunker that is mounted longitudinally on the machine, with the body being raised hydraulically to deliver its contents to a rear-mounted and telescoping side-delivery conveyor.

The new layout is said to lend itself to unloading on the move, a function not possible with the two previous versions due to tractors and trailers having to run over the hemp straw swaths.

Hemp among the vines

Hemp sector gears up for growth

The New Zealand hemp industry appears to be coming of age.

Innovative new products using wool and hemp fibre will be developed under a new partnership between NZ Yarn and Hemp NZ.