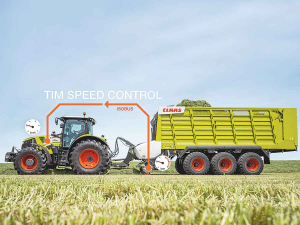 CLAAS will take a silver medal in the Agritechnica Innovation Awards in November for its Cemos Auto performance feature.

Cemos Auto should be a welcome addition to the Jaguar 900/800 series self-propelled forage harvesters.

Conversely, engine power is reduced automatically if the load decreases.

The goal is to avoid abrupt load changes whilst maintaining a relatively constant engine speed, resulting in an even crop flow, higher operational reliability, lower fuel consumption and an easier life for the operator.

In other news, the third generation, family owned manufacturer has released a new control system to optimise the performance of its Cargos 9000 and 8000 forage loader wagons when used with any ISOBUS compatible tractor.

The TIM speed control system automatically regulates the forward speed of the tractor according to the real-time throughput of the wagon’s pick-up. Torque measurements on the feeder rotor and pick-up provide the basis for measuring machine loading, which in turn reduces forward speed during periods of high intake and the opposite during periods of low intake.

Initially developed as a cruise pilot function for use with Claas tractors, the system has been reprogrammed to the AEF TIM standard, meaning it can be used with any ISOBUS-compatible tractor.

Available in six models from 30 to 50 cu.m, Cargos 9000 and 8000 forage loader wagons are available with several new options for improved safety, efficiency and soil protection.

A side-mounted, reinforced compartment cover, operated by a hydraulic ram, secures and protects the loaded forage.

Each model can be equipped with two or three roller feed-out modules that can be easily removed to increase the payload, with a torque measurement system available for automatic unloading.

Most models can be fitted with 800/45 R 30.5 Alliance 885 radial tyres for increased ground contact, reducing ground pressure and increasing traction and self-cleaning properties.