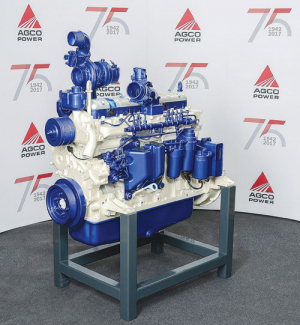 AGCO is this year celebrating the 75th anniversary of AGCO Power, its engine business.

And it has produced its one-millionth AGCO Power engine at the factory in Linnavuori, Nokia, Finland.

AGCO Power started making engines in Linnavuori 75 years ago, later becoming an important part of Valtra, which was bought by AGCO in 2004.

AGCO has since developed new products and innovative engine technologies and has increased production capacities at the plant.

At least 70% of AGCO machines use AGCO Power engines -- in Massey Ferguson, Valtra and Fendt machines delivered to the Australian and New Zealand markets.

The company is noted for its pioneering development of emission reduction technologies; it was the first to launch SCR technology in agricultural machinery in 2008. Now its engines meet and exceed the latest emission regulations in the EU and the US, complying with the Tier 4 emissions standards.

AGCO Power engines are also ready for the stage V emission regulations to be phased in gradually in 2019 and 2020, whose development started several years ago.

With AGCO buying the grassland division of Lely in 2017, it was a sure bet Massey Ferguson would launch a new round baler range taking the best from the Welger stable and building on MF’s long history in such products.

Global tractor and machinery manufacturer AGCO is never far from the news, so with the grass harvest about to start in New Zealand, two new products from the MF camp will get plenty of attention.