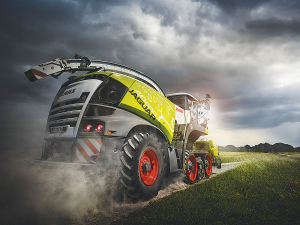 Claas has made its 40,000th Jaguar forage harvester at the Harsewinkel, Germany plant and company headquarters.

And the renowned manufacturer won a Gold Innovation Award for a Jaguar Terra Trac at the recent Sima agribusiness show in Paris.

Since the first Jaguar series in 1973, Claas has become the world market leader in self-propelled forage harvesters. Innovation and efficiency have defined the Jaguar success story for 40 years.

The rapid increase in maize cultivation beginning in the late 1960s called for greater harvesting outputs as mounted and trailed units hit their performance limits. Claas quickly recognised the potential of this segment and in June 1973 launched a high-performance self-propelled forage harvester, the Jaguar 60 SF.

In 1976 there came the Jaguar 80 SF that could seperate the chopping cylinder and the intake roller, running a discharge blower and an automatic guidance system.

The Jaguar 800 arrived in 1993, with engine outputs from 228kW (310 hp) to 354kW (481 hp), fitted transversely behind the steering axle; this enabled simple, direct drive systems, an optimal supply of cooling air and access to the interior of the machine.

Thanks to favourable drive axle loading it became possible for the first time to fit eight-row maize front attachments.

The Jaguar 900 series, introduced in the 2008 season, came with intelligent engine control, continuous moisture measurement, the convenience of the CEBIS system and a new V-Max chopping cylinder. The Auto-Fill automatic filling system was awarded a gold medal at Agritechnica 2009.

The Claas Jaguar won Machine of the Year at Agritechnica 2011, notably for its Dynamic Power control system which matches power output to demand. In the 2017 year Claas introduced a steplessly variable front attachment drive and an enhanced crop flow system,

In 2018, Claas introduced the Jaguar 960 Terra Trac, the first forage harvester with a factory-integrated crawler track system; this protects soil in all conditions and is narrow enough for road travel.

Claas has improved its popular Arion 600/500 tractors to coincide with the introduction of Stage V engines.

Claas Xerion gets on track