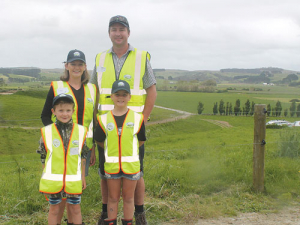 Helensville farmers Scott and Sue Narbey with Bella and Ollie.

‘A good story’ was a key motivator for fourth-generation Helensville farmers Scott and Sue Narbey to open their farm to the public.

The couple opened their farm as part of Fonterra’s Open Gates 2018 day.

“We entered the Ballance Farm Environment Awards and when we started writing down all the good things we were doing we thought we were doing a pretty good job,” Scott told Dairy News.

“And we were sick of hearing all the bad things and how people perceive dairy farms.

“We have been telling Fonterra to put our good story across to the public for a long time and they came up with this concept and we thought, ‘well this something we could help with’.

“We did it last year and it worked quite well.”

Eight hundred people booked within two days to attend the Narbey farm but heavy clouds deterred some Aucklanders from turning up.

Final attendance was was 520 people, with at least 12,000 people registering nationally for Open Gates on November 11 and 500 staff volunteering. One Christchurch farm had a turnout of 780.

Scott says the visitors were very responsive and the different levels of people who come was interesting: some had never touched a cow before and never seen a cow being fed or milked.

“And they are not very far away from where it is happening so it was surprising for them and they took a fair bit out of it.”

The staff were prepared to give it a go a second time and the farm gets a spring clean pre-Christmas “which is not a bad thing”.

The Narbey’s 155ha milking platform and 410-cow system 5 operation won the Auckland Ballance Farm Environment Awards in 2017 and Scott says he was proud to open their environmental work to the public.

Feedback to Open Gates has been “overwhelmingly positive,” a Fonterra says.

Scott says they have done all their calving on a calving p\ad for the last three years.

“It is something we think has helped us a lot with metabolics. We don’t have any down cows in the spring calving time because we know exactly what they are eating, how much they are eating and how many minerals they are getting.

“It doesn’t make any difference if it is raining. They still get the same amount of feed.”

They are on Kaipara clay so they can get very wet.

“So our feed pad and calving pad are very beneficial. We can get them off the pasture when it is wet -- no pugging and we can look after the pasture.

“Come spring time, September, we can grow a lot of grass here. If we haven’t pugged it, it sets us up.

“We do relatively high supplements. We have a runoff and we bring maize in from another runoff. We grow all the grass silage onfarm here.”