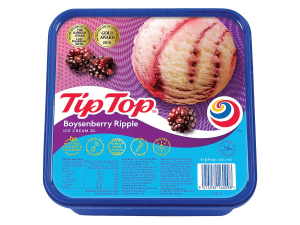 Tip Top’s Boysenberry Ripple ice cream won the top prize for the fifth time, and it won in the standard ice cream category.

Fonterra still supplies milk and cream to Tip Top; most of the ice cream maker’s ingredients are sourced from within New Zealand.

As part of its revised strategy, Fonterra sold the company earlier this year, for $380 million, to the British company Froneri, owned by Nestle and R&R Ice Cream.

Tip Top marketingmanager Mel McKenzie says winning the Supreme Award with Boysenberry Ripple for the fifth time  was an honour.

She says top quality milk and cream and fruits by farmers around the country provide a winning combination.

About 60% of sales are made in summer.

NZICMA spokeswoman Hannah Wood says New Zealand-made ice cream and gelato is arguably the best in the world, made from top quality dairy and other locally sourced ingredients, and the awards are a great opportunity to showcase this.

“It’s fantastic to see so many different ice cream makers – from smaller boutiques to large established manufacturers – take out the coveted Best in Category trophies. It demonstrates the high level of quality overall, which is great news for anyone who loves ice cream and gelato,” said Wood.

One category changes each year to highlight a star ingredient: for 2019 it was all about nuts.

The winner of the Best of Nuts category was Little ‘Lato, which made hazelnuts sing in its winning Hazelnut Chocolate gelato.

The judges said the spicy, sweet Massaman Curry gelato hinted at the complex flavours in the popular Thai dish. It was a great example of the innovation NZ ice cream makers bring to the Open Creative category, they said.

There was no shortage of creativity this year, with other entries including turkey with white chocolate gravy and stuffing, and beetroot and ginger.

Tip Top’s owner pays $6b for US ice cream business

The new owner of Tip Top Ice Cream, Froneri is paying over $6 billion for Nestle’s US ice cream business.

OPINON: Fonterra doesn't have the capital to take Tip Top to its next phase, so selling it now may be beneficial for the co-op's farmers.