Thanks John, for the milk price! 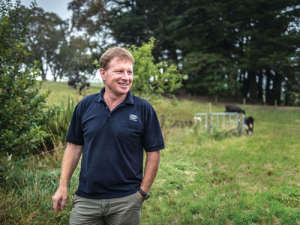 In a eulogy at Wilson’s funeral in Hamilton early this month, van der Heyden told of Wilson’s relentless push for a fair and transparent milk price.

“His relentless questioning and his ability to process and retain vast amounts of information means we have a tremendous legacy from him in the milk price,” he said.

“John is the godfather of the milk price… the milk price is all dairy farmers really worry about; it represents security. We should light a candle to John every season.”

Illness had forced Wilson to step down as chairman last July and he died at his Te Awamutu home on January 28. At least 1000 people attended his funeral.

Van der Heyden, who has stayed out of dairy industry affairs since retiring from Fonterra’s board, said he was “more than a little humbled” to be asked to speak at the funeral.

He said Wilson had the ability to “rise to the top the way cream does”.

“All by itself and what put him there was his ability to bring farmers along with him. He had enormous ability to absorb, interpret and use information intelligently and persuasively.

“He would turn information into visionary concepts that farmers could believe in.

“He connected with them in their language and on their terms and they chose him as a director and ultimately as chairman.”

“He got this totally wrong; John was always his own man and plenty of people can vouch for that.”

Van der Heyden explained Wilson’s work on the milk price before and after Fonterra was formed.  Before Fonterra the New Zealand Dairy Board handled all dairy exports and the co-ops managed the domestic market.

The NZDB paid farmers for their milk using a basic formula of revenue minus costs; co-ops added a margin depending on how good they were in the local market.

Van der Heyden said farmers could see how the co-ops made their money but they could never see what drove the revenue line in the Dairy Board.

“This was a multi-million-dollar business but we could never get a handle on their costs: it was all a matter of faith and it drove John mad. He believed to his core that farmers should be able to see the numbers -- warts and all -- and know they were absolutely right.

“So, when we introduced Trading Among Farmers, John was like a terrier in getting the milk price right and, above all, truly independent.

“He knew it had to stand up to scrutiny from all corners – politicians, competitors, regulators and especially farmers. There could be no possibility of money moving around   to benefit investors over farmers or vice versa.

“Today we have a model based on revenue less costs which is fully transparent [in both respects] and independently reviewed by the Commerce Commission. So, for example, farmers today know the milk price has benefitted by 40c/kgMS as a result of efficiencies and savings. They also know the days of lagging behind European dairy farmers are long gone.  That price parity is one of John’s legacies.”