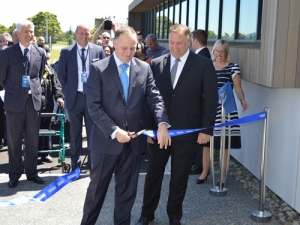 Key says the use of innovation and science is helping the industry succeed.

He says the size of the New Zealand dairy industry is often misunderstood overseas.

"When I go out and negotiate free trade deals around the world, people often think that we are bigger than we actually are,' he says.

"We only produce 3% of the world's milk; the issue is we are the biggest exporter because of our small domestic population.

"So, we export bulk of what we produce."

Key says New Zealand's dairy industry does this in "a completely unsubsidised way" and is still successful.

And part of the reason of this success is what companies like WMS do.

Key says WMS is driving innovation and technology and use of science.

"Anyone can milk cows and own big cows; the difficult issue to get level of production and productivity that that we getting."

Key also praised WMS for not only developing milking technology but exporting it around the world.

This is crucial to New Zealand's success, he says.

The newly launched Waikato Milking Systems Walkover Sprayer is designed for use in herringbone and parallel dairies to apply teat spray accurately during entry or exit.