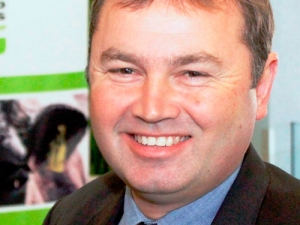 Stephen Crawford, Federated Farmers dairy chair in Otago, says three of his haybarns have had walls blown off.

Dairy farmers in Otago and Southland have taken a hit from unseasonal high winds that have demolished haybarns and generally disrupted their farming.

Stephen Crawford, Federated Farmers dairy chair in Otago, says three of his haybarns have had walls blown off. And the winds have cut his power.

"It was a pain for dairy farmers trying to milk. I have two cowsheds and when the power went out I got the generator connected and then suddenly the power came on again. It was pretty challenging."

The power cuts were typical of what happened right across Otago, he says. Some people were without power for 36 hours.

A nearby sheep farmer had his lambing pens blown across the paddocks.

"There were times when I found it hard to stand up in the paddocks because the gusts were so strong," Crawford says.

At Colac Bay, Southland, the dairy chair of that province, Graeme McKenzie, was one of the first farmers hit by the winds. They look out onto Stewart Island and there isn't much between his farm and Antarctica, he points out.

The first sign of trouble came when he was watching the rugby on television and service was disrupted by the winds.

"We had power out for 12 hours, but in the end it didn't cause too much disruption. Trees were blown down and sheds were damaged. Because of the loss of power some farmers had to delay milking."

But McKenzie says they are used to the high winds and are set up to handle them.

Likewise in North Canterbury where Cameron Henderson noted that wind two years ago blew most of his trees over so there wasn't a lot more the wind could do.

Some sheds were damaged but the power was not cut. He says the early warning from MetService gave farmers time to move irrigators to where they could save them from the wind's effects.

No place for gender bias in farming — Milne

Former Federated Farmers president Katie Milne says having women in the farmer lobby leadership team is a reminder that NZ ag is about couples working together.