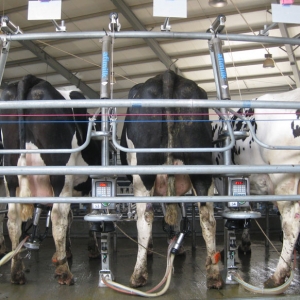 Farmers will hope prices bounce back at the next auction on April 1, he says.

“Farmers are sick of the word ‘volatility’ but the last auction just reinforces the level of uncertainty out there,” he told Dairy News.

He says farmers are more positive about next season but he cautions them about getting their hopes too high.

The 8.8% drop in the GDT price index brings to an end a six-auction winning streak that started last December and had two big improvements in February. Whole milk powder slumped 9.6 % and skim milk powder fell 5.5%.

It was the first auction since the 1080 contamination threats were made public by New Zealand police.

Federated Farmers Dairy chairman Andrew Hoggard says farmers will be disappointed but he points out farmers have no control over the markets.

“That is the nature of farming so it’s always hard to accurately predict the reasons for these drops, which ultimately affect our bottom lines.

“To be honest I wasn’t expecting such a big drop, given the previous lifts in GDT, but that just goes to show how unpredictable the market is.”

Hoggard says there’s a lot of speculation on why the price has fallen, and all indicators now point to a supply issue. However until the experts have had time for analysis it is hard to know for sure.

“Regardless of where it has come from, this is not great for farmer confidence, and hopes of getting back to a $6-plus payout next season will be lower if we don’t see continuing lifts in the next few auctions.

“In light of everything, it’s important farmers don’t jump to conclusions too early and just get on with what they can control – putting sustainable milk in the vat.”