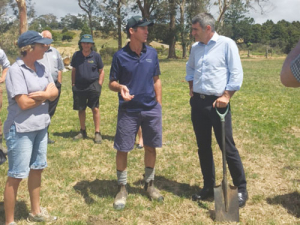 Roger Hutchings (middle) and Minister for Primary Industries Nathan on his farm earlier this month.

Everyone was smiling recently at a discussion meeting hosted by Okaihau, Northland dairy farmer Roger Hutchings on his farm.

Primary Industries Minister Nathan Guy on February 3 had officially declared the region was in the grip of a medium scale drought.

But since then two bouts of rain have got the grass growing on his and other farms in the area.

Nevertheless, he says, the next two weeks will be telling as to whether they are out of the woods with drought.

“Since the drought was declared we’ve had one lot of 50ml and another lot of 60ml,” he says. “The grass has started to grow quite nicely now.”

Hutchings says it is looking promising. “It depends what happens over the next couple of weeks. If we get more rain then definitely the drought will have broken.

“The rain has lifted farmer morale and got people back in a positive frame of mind, which is good.”

At the time Dairy News spoke to him two weeks ago, Hutchings’s Fonterra-supplier farm had not had any significant rain since October. He had moved to once-a-day milking and culled his 700 herd to 620.

DairyNZ is joining with other agencies and organisations to coordinate support for Northland, with a focus on facilitating farmer-to-farmer advice.

Other regions are also facing drier than average conditions.

“Dry conditions have come on faster and harder than usual because temperatures have been higher and it has been a lot windier.

“Adding to the problem is the fact we had a wet spring causing the crops many farmers rely on to struggle to establish and grow. This means farmers are faced with tough decisions as they find a way to feed their cows now and look ahead to calving when they rely on maize.

“Individual decisions will need to be made about how to balance feed supply and demand. Factors to weigh up include costs and how many cows to keep milking and how often.”

Neill says dairy farmers are good at sticking together and sharing information.

“Farmers have learnt a lot through past droughts and have plenty of techniques for managing the supply of feed to their cows to meet the demands of keeping them in good condition,” says Neill.

“Sharing these techniques and experiences is important, especially for those new to the industry or to Northland.”

DairyNZ is using its local discussion groups and, with other organisations, is hosting community barbecues to allow farmers to get off-farm and share information with others.

“We are working with the Rural Support Trust and a wide range of other organisations to ensure farmers know there are people they can turn to. It’s important for farmers to know they are not alone,” says Neill.

“The best support can be talking to your neighbours and just hearing what others are doing. That’s what we’re trying to facilitate through our farmer networks. Farmers should contact their local DairyNZ consulting officers for updates on when and where these events will be held.”

“With three quarters of the season’s milk collected, Northland milk production is currently around 6% lower than last season,” Newman says.

“The improved milk prices this season are much needed as seasonal conditions have reduced production and increased costs for many Northland farmers.  This has delayed the financial recovery for those in the north.”