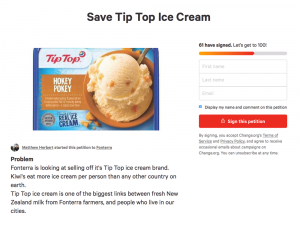 A screenshot of the fast-growing petition.

Fonterra farmers and Kiwis are vowing to fight to save Tip Top ice cream from changing hands.

Matthew Herbert, a Fonterra farmer, has started a petition urging Fonterra farmers to ask the board and management to keep Tip Top in the co-op’s stable.

Fonterra confirmed today it is considering selling the nation’s beloved ice cream brand, a subsidiary of the co-op.

Herbert says Tip Top is a key link for the rural-urban divide.

“Tip Top ice cream is one of the biggest links between fresh New Zealand milk from Fonterra farmers, and people who live in our cities,” he says in his Change.org petition.

He adds that Kiwis eat more ice cream per person than any other country on earth.

Fonterra chairman John Monaghan says while the co-op’s only ice cream business is performing well, it has reached full maturity as an investment. He says to take it to its next phase successfully will require a level of investment beyond what Fonterra is willing to make.

Tip Top’s owner pays $6b for US ice cream business

The new owner of Tip Top Ice Cream, Froneri is paying over $6 billion for Nestle’s US ice cream business.