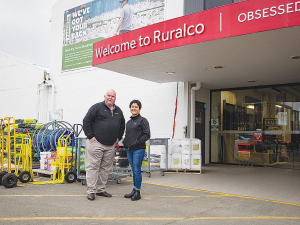 The co-operative’s chief executive Rob Sharkie says the campaign, launched at Ruralco’s Instore Days earlier this month, will run for at least a year and possibly longer.

“Our hope is that by providing awareness and momentum the campaign will grow to have legs of its own in the future,” Sharkie told Dairy News.

He says the initial response has been positive so far, with anecdotal feedback showing farmers and suppliers see great value in the campaign.

“We have already had both farmers and suppliers asking how they can be involved.”

Sharkie says the campaign came about as a response to farmer surveys which showed that farmers wanted a voice of advocacy to share the good news stories and positivity of the farmers sector.

“We share these ideals and understand our shareholders expectation of Ruralco as a co-operative is that the business they own, supports them too.”

He says the deluge of regulations from the Government is a major concern for farmers.

“It is concerning that the designers of regulations are often not farmers or those who have a clear understanding of the practicalities of farming and this is causing some angst for farmers. Often regulations are not well thought through regarding the implications or the applications of what’s being proposed.”

He says we have to be careful not to lose a generation of farmers due to this onslaught of regulations which alienate and have the potential to push the next generation out of farming.

“We don’t want it to be too hard for our farmers’ sons and daughters and see a return to what happened in the 1980s.”

He says Covid proved the importance of the primary sector, both in New Zealand and internationally.

“The business of farming has not stopped and the rest of the world has continued looking for protein and food.”

Sharkie says that while there have been good commodity prices, there have also been price increases which have affected the cost structure.

“That’s why it is important farmers are paid at market rates – it’s all about market demand.”

OPINION: Your old mate's editor was contacted by Ashburton-based farmer co-op Ruralco in relation to this old mutt's recent column about the difficulty in signing up to the organisation.