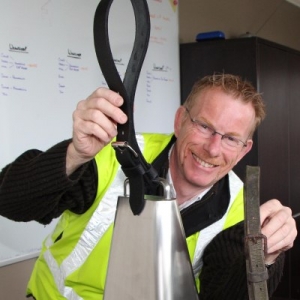 When Fonterra shareholder Philip van der Bijl stepped up to ring the market bell on the stroke of midday today it marked the start of live share trading among farmers, and a new era of opportunity for New Zealanders to join the Fonterra success story.

The South Island-based farmer was on hand at a special ceremony to mark the official launch of Trading Among Farmers and cut the ribbon on the coop's new Darfield site, its first new greenfields site in 14 years and a $550 million investment in Canterbury's future.

Fonterra chairman elect John Wilson said the launch of Trading Among Farmers and opening of the new Darfield site symbolised the strong future for the 100% farmer controlled and owned cooperative.

He said while Fonterra is a global company its roots have always been firmly planted in rural New Zealand, which is why the events were combined at Darfield.

"Both milestones will help the co-op deliver on its strategy refresh announced earlier this year," Wilson said.

"Trading Among Farmers provides Fonterra with a stable capital base and creates the conditions of confidence for us to invest in the most productive areas to add value, grow our brands beyond existing positions and compete strongly in the most rapidly growing dairy markets in the world – South East Asia, Middle East and, of course, China," he said.

Chief executive Theo Spierings said Fonterra's Darfield site represented a great achievement for the operations teams that had overseen its construction and successfully commissioned the plant just as the new season got underway.

"This is a tribute to the hard work of more than 1500 people who have built a world-class dairy processing site – from paddock to powder – in just 18 months," Spierings said.

"Since August, when the first bags of whole milk powder rolled off the production line, more than 30,000 metric tonnes of high quality product have been produced, destined for customers in China, South East Asia and the Middle East. That's enough to fill about 1300 20-foot containers."

Darfield processes around 2.4 million litres of milk in a single day.

"This new site is already playing an important part in delivering on our business strategy. It is one of our most efficient plants, with the capacity and flexibility that will help drive further performance improvements and a better payout for our farmers," said Spierings.

"Our farmers are the best in the world at turning green grass into fresh milk. Darfield is a world-class manufacturing facility that produces top quality whole milk powder at efficiency levels that will drive volume and value right through the supply chain – and will contribute to improved returns for our farmer shareholders."

Work is now well-advanced on building a second drier at the Darfield site, which will be ready to process milk in August 2013. When it has been commissioned, Darfield Drier 2 will allow the site to process an additional 4.4 million litres, on top of the 2.4 million litres the first drier puts through daily.

The bell is pictured above with Fonterra southern operations engineering manager Greg Millane.