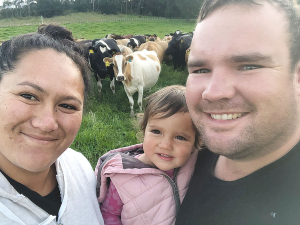 This Kaipara Young Farmers member is in his second season 50:50 sharemilking 150 cows near Wellsford, Northland.

Bakewell’s enterprise is small by industry standards — the region’s average herd size is 300 cows — so this business studies graduate of Massey University has had to generate extra income.

The farm overlooks State Highway One carrying 15,000 vehicles daily, and he saw this stream as an opportunity to be tapped.  In August 2018 he began selling raw milk from a vending machine on the farm.

The machine is one of 15 in New Zealand selling unpasteurised milk, which “baffles” him because, of the 10,000+ dairy farms in NZ, only 26 are registered as raw milk suppliers.

Herd owning sharemilkers only receive half a farm’s monthly milk cheque so Bakewell’s business idea was driven by economics.  “I believe in getting creative and thinking outside the box to make business opportunities work,” he said.

The herd is split in two: about 130 cows are milked once-a-day and their milk is sold to Fonterra; 17 cows in a separate mob supply the vending machine, accessible to customers 24/7.

The raw milk business, known as Bakewell Creamery, is run by Bakewell and his wife Jaye. His parents have also invested in the venture.

“We pay the farm’s owner Duncan Johnson a rate per litre for milk sold through Bakewell Creamery,” said Bakewell.

The milk $100,000 dispensing machine is housed in a small purpose-built, transportable shop at the front of the farm. The milk is sold for $3/L. Reusable glass bottles can be bought from a second vending machine for $5.

Bake well says he wanted a stronger connection with consumers of his milk who are “grateful and appreciative,” he says.  He uses social media to market the business and is looking into expanding his customer base, noting that Auckland is not far away.

“Until the rules change, our only option to get our fresh milk into Auckland fridges is to bottle it and deliver it. That would be labour intensive,” said Bakewell.  “But we’re talking with other companies that deliver to homes in Auckland.”

“One option could be that a bottle of our raw milk is included in produce boxes,” he said.

In their venture the Bakewells have been guided by Richard Houston, who started Village Milk in Golden Bay in 2012 using a vending machine from Italy.

A Southland dairy farming couple offering home delivery of both raw and pasteurised milk, as well as other produce, is expanding their business as demand climbs during the COVID-19 lockdown.

Faith in raw milk to save farm

In a bid to future-proof their business, Otaki dairy farmers Andrew and Stacy Faith have just installed a raw milk vending machine.

Ease up on good guys

It's time to give complying raw milk suppliers a break by easing the regulations on distribution, says a supplier.