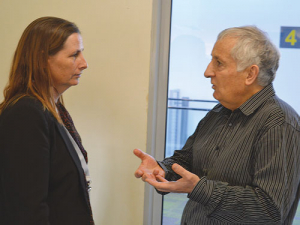 Keith Woodford makes a point to Feds president Katie Milne at the conference.

Agribusiness expert Keith Woodford is warning that the chances of eradicating Mycoplasma bovis are not high.

The retired Lincoln University professor told the Federated Farmers dairy conference in Wellington two weeks ago that a contingency plan is needed in case the eradication fails.

“It’s incredibly important that it’s thought through in advance; if this eradication doesn’t work, how are we going to manage it and who is going to take responsibility for it?” he asked.

“Is it the Government’s responsibility or should the industry take control?”

Woodford believes the dairy industry won’t be able to control M.bovis in the way it has controlled TB.

He also rubbished claims that the Government’s technical advisory group had recommended eradication.

The 10 scientists and experts on the group were divided: four members took the view eradication wasn’t feasible while the remaining six said it was technically feasible.

Woodford says the six experts backing eradication “added a whole lot of caveats why it was not practical and why it may or may not happen”.

He also criticised the decision to forward trace M.bovis and not to trace the disease back to its origin.

“This is a 10-year battle; the decision to go ahead with it was a decision of the Government and the industry groups together.”

Woodford questioned whether anyone knows how long M.bovis has been in the country.

In late July last year, the Ministry for Primary Industries announced the detection in a South Canterbury herd of a cattle disease never before seen in New Zealand.

The ministry said 14 cows in the herd of 150 had tested positive for M.bovis – a potentially deadly disease that caused mastitis, pneumonia, abortions and lameness.

But Woodford says three weeks after the   first case international experts said this was highly likely to be the first case in NZ.

“Right from the start I have been saying to MPI, ‘backtrace, backtrace don’t just forward trace’.”

MPI has now backtraced to 2015 but Woodford says the disease may have been present even before that.

“MPI knows about this and apart from one conversation with the farmer no one else has come back to the farm.”