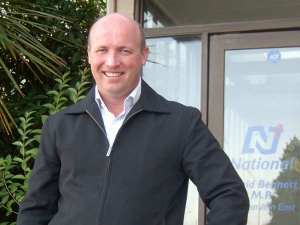 David Bennett who’s just taken over as the National Party’s new spokesperson on agriculture is a dairyman at heart.

He says he’s naturally stoked to have been given what he describes as the pre-eminent portfolio in NZ politics but he also has a consuming love for dairy farming.

After graduating with law and accountancy degrees from Victoria University, Bennett embarked on what turned out to be a very short career in the corporate world. He lasted just two years working for KPMG in Auckland before giving away the glitz and glamour of that world and going back to his passion – dairy farming in the Waikato.

Both his parents had been involved in the dairy industry and that experience inspired him to work hard and buy his own farm.

This he has done and he now owns two farms outright and is a partner in a third.

All the farms are in the Te Awamutu/Paperangi areas. One of them is a 40ha organic farm running 140 cows and producing 35,000kgMS. Attached to it is a 38ha run-off block.  His other farm is a 97ha property with 320 cows that produces 95,000kgMS while the third, in which he is a partner, runs 240 cows on an 80ha block and produces 80,000kgMS. The cows are mainly Jersey and operate mainly on system one.

Like all farmers in the Waikato, Bennett says his properties were badly hit by the drought with high feed bills and the need to dry off cows early. He says many people don’t understand the pressure that farmers are under in a drought.

He says he sympathises with what farmers in Hawke’s Bay are going through – especially as they head into winter trying to feed stock and maintain their businesses.

It was farming that was the catalyst for Bennett’s move into politics. He was president of Young Farmers and that inspired him to have a tilt at the Hamilton East seat, which he won in 2005 and has held ever since.  While politics demands that he spends a lot of time away from his farms, he still makes sure there is time to get back on the farm

“I love the cows, I love being outside and I have loved working for myself and building up a business. At the weekends I try to get out there and do a bit of fencing and it’s good for soul. And if you are whacking a few Waratahs into the ground you can think about the opposition,” he says.

Bennett says the day-to-day running of the farms is vested in three staff whom he says are as passionate as he is about the primary sector.

Bennett says from now on farming and horticulture is going to be crucial as the country recovers from the Covid-19 pandemic. He says it will also be a time when the wider community will support and acknowledge the contribution of agriculture and horticulture.

“I think it is also  good that farmers feel part of the nation’s family and that they are valued and  not ostracised and have that support for the hard work they do, not only for their own businesses but also  the downstream business that they support  by the costs they incur in their own farming and horticultural operations,” he says.

Looking to the future says realistically everyone is going to have to deal with increased compliance in this area over the next few years.

“I don’t see how we can walk away from that, but we need to do it in a way that is scientifically based and manageable on farm,” he says.