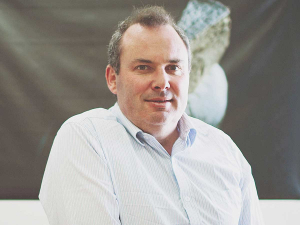 The quality of local milk is a key to Oamaru based Whitestone Cheese’s latest international success.

“Very few cheeses are pressed with a white mould on the outside. That is why it would have stood out on a table of 45 cheeses (at the World Cheese Awards),” he told Dairy News.

Plus the whole milk adds lot of flavours. “The great raw material we have here in North Otago comes through in that recipe.”

Milk is supplied through Fonterra from two farms near Oamaru.

“This is certified milk for export and domestic supply because it is part of the Fonterra system. But it is raw so it has come straight from the cow and then we pasteurise it ourselves.

“We will take delivery late morning or mid-morning, we hold it overnight and pasteurise it the next day. So it is a good fresh milk supply.

“It definitely adds to the flavour of the cheese because we are using whole milk, we don’t standardise it.”

Berry says while that adds further complications later on when they try to get the standard weight and standard yield from cheese, using whole milk provides “all those natural flavours”.

Farmhouse took the bronze award in Italy in one of the semi soft - cow’s milk categories.

Whitestone in 2016 won a silver medal at the World Cheese Championships in Wisconsin for its Vintage Winter Blue cheese. But this was its first entry in the Europe-based World Cheese Awards and a first time international entry for Farmhouse which is the original cheese that launched the company in 1987.

Whitestone’s sales manager Franco Sessa, who is of Italian origin and has been with the company for years, travelled to the awards to support the cheese and was invited to be a judge.

The awards chose 260 judges from around the world to rate the 3804 cheeses initially in tables of 45 cheeses.

The judges were not necessarily technical cheesemakers so were judging from a consumer’s perspective on flavour, how the cheese had aged, how it was handled to create flavour and the enjoyment of a good tasting cheese.

Simon’s parents Bob and Sue Berry were initially shown the Farmhouse by a local artisan cheesemaker and they developed it from there. The natural green and brown rind was not appealing on the market. Then they hit on the idea of importing fresh white mould usually used in camembert.

It became a beautiful looking cheese and sales lifted immediately, Berry says. “We evolved the recipe to our own way. It is our philosophy that we put our own twist on things.”

Whitestone grew its full range from there to meet the market.

Farmhouse is a difficult cheese because the white mould needs to breathe. It is sold in specially treated wedges but is best eaten as a whole round.

“The flavour hasn’t changed in all the years we have had it. It has a beautiful full flavour of full cream milk and it has a freshness about it because it is just a little bit different.”

But it is not an acquired taste like a blue or a washed rind.

“It is a real pride to Mum and Dad who started the company to show their first cheese is right up there. It is the first time it has been recognised on the global stage.”

New Zealand is a young market for specialty cheese and consumers are quite fresh to the idea, says Berry.

We have only been making specialty cheese for 35 years here compared to centuries or even thousands of years elsewhere.

“We have seen the shift away from processed foods into natural foods -- no sugars added and natural ingredients -- so it is seen as a health food now. It is great to see it is being appreciated for what it is.

“We have world-class milk and we know that because of the state of our dairy export sector. We are making world-class cheeses here in New Zealand from that.”

There’s a big lift in sales in summer with outdoors dining. “It is common now that when you go to a friend’s place you have cheese on the table before anything kicks off.  Not even 10 years ago it was a sort of treat but now it is a commonplace.”

Whitestone is focusing on NZ domestic markets, with under 5% now being exported, partly because of the difficulty in regulations, marketing and competition for cheese. The company’s best export markets are close to home in the Pacific Islands and Singapore, and a little into Australia, Japan, Hong Kong and the United States.

But domestically in the last two years Whitestone has had 8% growth in the retail category.

Moves by the European Commission to grant exclusive use of the term 'halloumi' to Cyprus cheesemakers is raising concerns among the New Zealand cheesemaking community.