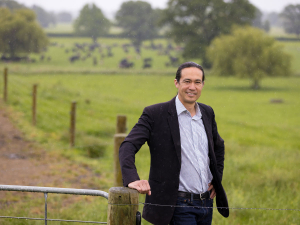 New LIC chief executive David Chin says it was the best time to be a herd improvement company.

Chin, who took over the CEO role three months ago, told Dairy News that it was the best time to be a herd improvement company.

Chin believes if the sector is going to meet its climate change targets, then "we need to rethink how we run as an industry".

He says the industry will need to meet methane targets while maintaining production.

"Through genetics - the way we operate, the way we feed our cows - we have huge potential to unlock productivity gains.

He points out that LIC recently completed internal analysis of a group of 200,000 Holstein Friesians from all over the country.

The cows were ranked on Breeding Worth (BW) and divided into four groups; the high BW cows in the top quartile produced 73 kgMS more than those in the lower quartile.

And Chin says the top quartile high BW cows were achieving this at a slightly lower liveweight.

"So, they were slightly smaller cow producing significantly more kgMS per animal and were more fertile.

"And you do the math: there's a significant improvement in fertility and milk solids and that equates to big improvements in farm performance and productivity.

"And that's our wheelhouse. In the last five years, herds that consistently use LIC sires have been achieving 19 BW gain each year on average. That's almost double the rate of genetic gain than herds who have used little or no LIC bulls.

"We can actually give farmers a more productive cow through the use of our genetics and software and that's exciting.

"Herd improvement has never been more important to NZ farmers than it has been now."

Chin says LIC is engaging with farmers on how they can approach the new season.

Farmers are seeing the ability to do things smarter and things like the use of a lot more wearable technology is being discussed.

"Farmers are very much dialed into getting better genetics into their herds - that is really exciting."

Dairy herds are declining as dairy farms come under pressure from land use change.

Chin expects the national herd to continue declining in the coming years.

"They are the big ones and other issues are linked to them," he says.

Chin believes LIC is well placed to serve farmers in these challenging times.

"At the forefront of this will be the ongoing implementation of LIC's strategy, which is strongly supported by farmers because it puts them at the heart of everything we do.

"Under that strategy we have made clear commitments to our farmers in key areas to deliver value to them on-farm and a key focus for me as chief executive will be making sure we are meeting those commitments."

LIC has announced a solid half-year result despite challenges posed by Covid.