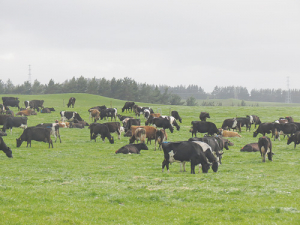 Antibiotic use in NZ dairy cows is much lower than that in the US, Canada or the Netherlands.

The calculated average daily usage (ADUR) is about 1.7 cow days of antibody usage per year from a study of 78 farms. This compares to ADUR of 5.4 for the US and 5.3 ADUR from records in Canada and the Netherlands.

The study was reported to the recent NZ Veterinary Association conference by Scott McDougall, Khaled Gohary, Andrew Bates and Chris Compton. Cognosco, AnexaFVC, Temuka and the Epicentre at the Institute of Veterinary, Animal and Biomedical Sciences, Massey University were also involved in the study.

“We have calculated the average daily use of antimicrobials (number of daily doses of antibiotics per cow per year) for 78 herds, split equally between the North and South Island,” the report says.

The range of usage amongst herds was relatively narrow with between one and four ADUR. However, some herds were outside the 95% confidence interval for the population and hence are outliers in terms of antibiotic use, the report says. It is not clear at this stage whether these outliers are due to a higher-than-average disease incidence in the herd, requiring greater antibiotic use, or related to sensitivity of diagnosis and hence the risk of overtreatment.

The second year of this study will examine recorded onfarm usage patterns and potentially identify where over/under diagnosis and usage is occurring.

The use of critically important (Class A) antimicrobials was relatively low, with about a fifth of the farms not using them at all and the remaining farms using, on average, 0.05 daily doses per cow per year.

There are some potential limitations of the current data and analytical approach. It is assumed that all antibiotics sold from the veterinary businesses in the calendar year 2015 were actually used within this timeframe.

Another assumption is that the antibiotics were used on-label.

Again further analysis will allow assessment of compliance with on-label recommended doses across these herds, the study says.

Data from this study was derived from clients of two veterinary businesses over one calendar year. The variation in ADUR between subsequent years was relatively small in one study but the variation amongst veterinary businesses in prescribing and diagnostic approaches is not known. Hence further data is required to gain representative national data relating to farm level antimicrobial usage.

By way of introduction the study says antimicrobial resistance (AMR) is an increasing problem in both human and veterinary medicine. Recently, guidelines to reduce the risk of emergence of antimicrobial resistance have been released by the British government, the Centre for Disease Control in the US, and the US Department of Agriculture, amongst others.

These strategies all broadly include components of measurement of drug usage, surveillance for antimicrobial resistance, prudent usage and an emphasis on alternatives to antimicrobial (AM) usage.

Estimates of AM usage are important to monitor usage of specific drug classes, assess AM sensitivity data, manage potential risks for AMR, monitor drug usage across time and regions, and to use as a proxy for disease incidence.

The herds in the NZ study were drawn at random from client lists of two veterinary practices in the North and South Islands (AnexaFVC and Vetlife, respectively).

To reduce potential errors associated with drug sales, herds that were part of business structures that had multiple farms under the one management and

Herds were visited on a six monthly basis and all hard copy records were photocopied and entered into a database. Additionally, cow demographic data were obtained from electronic sources (LIC, Hamilton) including age, breed, calving date, any disease and treatment records.

All drug sales for enrolled farms were extracted from the accounting packages of the veterinary businesses. Sales data for purchases of products containing antibiotics and administrable by injectable, intramammary, intrauterine or oral routes was retrieved from accounting software. The time period of interest was January 1 to December 31, 2015.

A total of 78 herds, managing 63,500 lactating cows, had sufficient data to calculate the ADUR – 39 in each of the North and South islands. The median ADUR was 1.59 daily doses per cow per year.

The predominant use of antimicrobials was mastitis-related, either dry cow therapy (DCT) or for treatment of clinical or subclinical mastitis during lactation.