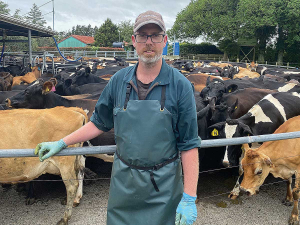 Shaun milks 230 cows on 89 hectares (effective) in a 50/50 sharemilking contract. All the young stock graze off the property after weaning from December 1. They return as rising R2s on May 31 two years later.

Shaun has a number of older cows in the herd, and he appreciates that age and multiple lactations makes those herd matriarchs more vulnerable to mastitis, and high somatic cell count (SCC). It makes his dry-off strategy a critical part of his management decisions.

“A couple of years ago, we started looking for a fresh approach to drying off,” Shaun says.

“We had been noticing that quite a few of the older cows in our herd – aged between nine and twelve years old – had higher SCC, even though they had been treated with antibiotic DCT most of their life.

“And, some of those cows were still coming in with mastitis at the start of the next season. We realised that the antibiotic DCT wasn’t doing it for them, so we decided to try something different.”

In 2019, he drenched 31 cows with a SCC of 150,000 or higher for five days before dry-off with probiotic ImmunoMax. It includes a blend of five strains of beneficial bacteria, five digestive enzymes, and a specialised strain of live active yeast.

That year the average SCC in that sub-group just before dry-off in the autumn was 556,000. On the first herd test the following spring, he says it dropped by 46%.

In 2020, the autumn average SCC on Shaun’s high SCC cows, before they were treated at drying off with probiotics was 678,000. That number dropped by 40% on the first spring herd test.

While the response wasn’t immediately as high as it had been with DCT (67%), there were longer-term advantages which Shaun believes has been potentially game-changing to his herd’s udder health, and natural immune function.