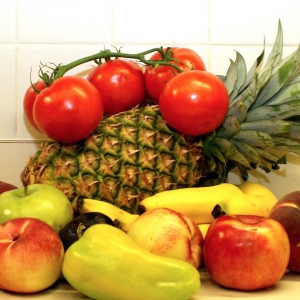 Going to the cricket this weekend? Leave fruit at home.

New Zealand's commercial fruit and vegetable growers are asking everyone going to the World Cup Cricket match at Eden Park tomorrow to help smash an unwanted Aussie visitor for a six.

The industry that takes every opportunity to promote healthy eating is taking the unusual step of asking fans not to take fresh fruit or vegetables with them into the stadium.

This request comes in the wake of last week's discovery of a small-localised population of Queensland fruit flies in the Auckland suburb of Grey Lynn.

Eden Park, the venue for Saturday's World Cup Cricket clash between Australia and New Zealand, is right on the border of the controlled area.

This means that people cannot take fruit and vegetable material out of the stadium.

"We are asking cricket fans to leave their fruit and vegetables at home when they head to the stadium," Horticulture New Zealand chief executive Peter Silcock says.

"You know it must be a serious situation if we are asking people NOT to have fruit and vegetables."

Three industry groups have joined to pay for a full-page advertisement in today's New Zealand Herald asking cricket fans not to take fruit to the ground.

"We feel it is the most pragmatic approach. It makes sense to ask people not to take food into the ground which would ultimately need to be thrown away as they were leaving," Pipfruit New Zealand chief executive Alan Pollard says.

The horticulture industry is united in its support of the Ministry for Primary Industries response to the fruit fly.

"We are grateful to the residents in the controlled areas who have been inconvenienced by this discovery, and also to the staff working on it and the organisers of the Pasifika event and the cricket who have had to make significant changes to their plans," Kiwifruit Vine Health chief executive Barry O'Neil says.

The potential risk to the $6 billion New Zealand horticulture industry (including fruit, vegetables and wine) from the Queensland Fruit Fly establishing here is two-fold. Both the destruction caused by the pest and the on-going cost of attempting to control it and the cost of international markets choosing not to accept our products.

The pest would also have a devastating effect on New Zealand's home gardeners.

Harvesting 15 tonnes of cabbage in hailstorms and hand weeding paddocks under a scorching sun made a perfect training ground for Austin Singh Purewal.