Good re-set in return to basics 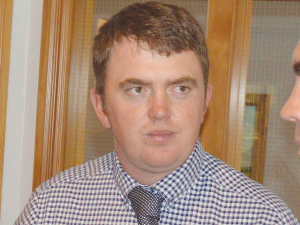 He says while the $605 million loss announced last week wasn’t unexpected, it would disappoint farmers.

But he points out that when times are tough farmers go back to the basics.

“The fact that Fonterra is going back to the basics will go down well with farmers,” he told Dairy News.

Langford says farmers will also take heart from the forecast of a profit and return to dividend at the end of this financial year.

“Farmers will be pleased that they won’t have to wait another year for a dividend.”

Fonterra chairman John Monaghan acknowledged that the co-op’s performance “is not where it should be”.

But he remains confident about the changes to strategy.

Monaghan points out that the $6.35/kgMS final payout announced for last season represents the third season of “sustainable payout”.

Fonterra is signalling a pullback from global milk pools to concentrate on New Zealand milk.

Monaghan says the co-op will no longer be “all things to all people”.

“We are going back to being a NZ based dairy co-op. We will no longer say we are world leading or the world’s best. Others can say that about us.”

He accepts that some bad investment decisions were made, particularly in China with China Farms and Beingmate.

But he pointed out that Fonterra still supplies 40% of all dairy products going to China. The co-op has a $2b food service business there and has created a $4b business there during the last few years.

Fonterra’s $605 million loss came mostly via writedowns of assets to the tune of $826 m.

The gross margin in its largest business, New Zealand Ingredients, was $1332 m -- up 3% on last year due to increased sales and price performance.

Foodservice performance also improved on last year, with gross margin up 10%. This was despite lower total sales volumes following a slow start to butter sales in Greater China and Asia.

Chief executive Miles Hurrell said the co-op’s normalised annual earnings were 17 cents/share, higher than the most recent 10-15 cent forecast for the year.

“But we can’t ignore that we had a number of challenges across the year, including Australia Ingredients, our businesses in Latin America and the consumer businesses in Sri Lanka, Hong Kong and New Zealand,” he says.