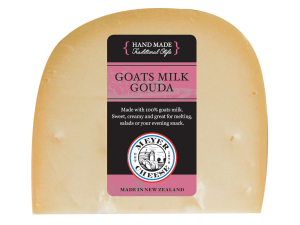 In 2017, its Meyer Smoked Goat Gouda won the champion of champions award for commercial cheese.

“It’s really a positive result for our business and team behind the scene and acknowledgement of my brother’s hard work as lead cheese maker for our business,” he told Dairy News.

He says cow milk is still the bread and butter of the business but the demand for other milks is helping drive sales.

“Since 2007 when I took over the business we started making a little bit of sheep milk cheese after constant positive feedback and building confidence in making cheese.

“Ten years later with an opportunity to buy some goat milk from a local supplier in Morrinsville we took the plunge in 2016 and started producing goat milk Gouda style cheese.”

The company gets its goat milk from the Averil family in Morinsville.

“Our supplier owns and manages Goatland Farm Ltd. They are suppliers of the Dairy Goat Cooperative but with the co-op’s support we are able to take some of the milk to produce this wonder product.”

Meyer says goat milk products are on the rise and consumers are looking for the products on the shelves.

“We are forecasting about five tonnes of goat cheese per year but after last night I expect this might increase.”

Meyer Cheese is a fully fledged family affair. Founded in Waikato in 1976 by Fieke and Ben Meyer, their next generation is now at the helm. Their son Miel took over as general manager in 2007 when Ben and Fieke retired. In 2011, eldest son Geert returned from The Netherlands to become the head cheesemaker.

Geert also collected a trophy at the awards when he was named Milk Test NZ Champion Cheesemaker – the second year in a row he has won the title.

Australian master cheese judge Russell Smith reflected on the results saying the awards for Dutch style cheeses reflect the quality of these cheeses in NZ.

“Kiwis are fortunate to have a handful of brilliant cheesemakers here making these types of cheeses.

“I judge across the world and Dutch style cheeses made in NZ are as good as anywhere in the world.”

Commenting on the Meyer Cheese Goats Milk Gouda, Smith said “It doesn’t come any better than this. This is a cheese you never want to finish. It’s just stunning. It’s superbly made and offers beautiful, sweet, nutty flavours.”

It is made to a traditional Dutch recipe that adds the cumin seeds to the curd. After three to six months of ripening the refreshing lemon zing of the cumin flavours the whole wheel. According to master judge Russell Smith, Mahoe Farmhouse Cheese’s Cumin Gouda “is an exceptional cheese”.

Anna and Bob Rosevear and their family have been making Mahoe cheese in the Bay of Islands since 1986.

The dairy landscape in New Zealand is changing, as it is around the world.

A report on the NZ goat industry aimed at charting the future for domestic and export goat products has dismayed long-time industry expert Garrick Batten.