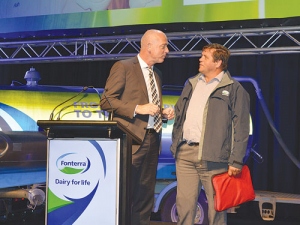 It is driven mainly by farmers responding to lower milk prices and cutting back production; major suppliers Europe and Australia are producing less milk. And the wetter spring in New Zealand has seen milk production fall 5.7% from levels last year.

Speaking to Fonterra shareholders at its annual meeting last week, Wilson said demand is growing at an average of 2% in key markets. Demand for dairy in China is growing, however it remains patchy in oil producing countries reeling under low oil prices.

In November Fonterra revised its forecast payout – a 75c increase in milk price to $6/kgMS and a dividend payout of 50c-60c. The revision reflects the rebalancing of demand and supply, Wilson says, and though the co-op expects returns to remain volatile it is maintaining its 50-60c range dividend.

Wilson says despite the rise in forecast payout, Fonterra is aware of the poor start to the season.

“For many businesses a lot of catch-up is required given the two poor seasons many have endured.”

The latest Global Dairy Trade (GDT) saw the average price rise 3.5% to $US3622 a tonne. This follows a 4.5% rise at the previous auction and is the fourth consecutive positive result.

The important whole milk powder price has risen 4.9% to $US3593 a tonne, comfortably in the break-even range for farmers who budget on about $US3000 a tonne to cover their cost of production.