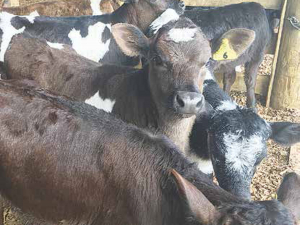 Calves grown faster in the first few weeks of their life lay down better tissue in the developing udder, and milk better as heifers.

Chris Collier, Probiotic Revolution, says this is based on research that shows that calves grown faster in the first few weeks of their life lay down better tissue in the developing udder, and milk better as heifers.

In a University of Illinois study, by initially growing calves faster, heifer milk an protein production increased by 10%.

Collier says Probiotic Revolution uses specific probiotics in Calf Xtreme that helps avoid nutritional scours and other health issues at the high rates of milk. Consequently calves just grow faster and with the product spilling into the rumen of calves, farmers are amazed at how much meal, hay or grass they eat after a couple of weeks, says Collier.

He says that one farmer who fed his calves 8 litres once a day, ran his heifers while out grazing with calves from two other family farms. They all had the same genetic base but at each weighing the 100 Calf Xtreme calves were a month ahead in liveweights compared with the other calves. There were no empties in these 100 calves, but 10 empties in the 150 calves not reared on the product.

Sick calves are also a nightmare and farmers know that when a calf is checked at a young age it does not perform well as a heifer.

"In times of stress or a disease challenge such as rotavirus we just doule the dose rate of Calf Xtreme," says Collier.

Crypto is more challenging and in addition to quadrupling the dose rate other control measures are needed. For coccidiosis a coccidiostat is needed.

Collier claims around 70,000 calves were reared on Probiotic Revolution's products last year and demand is expected to increase this year.

A series of open days will run in the North Island this month on controlling feed intake of calves and heifers.