Drying out after a red alert flood 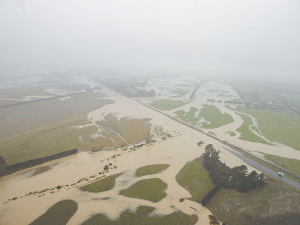 Some damage on farms will be permanent and some of it will take years to heal.

Canterbury is drying out after a rare red alert weather bomb dumped up to half a metre of rain across the province in only three days and caused "devastating" damage to swathes of farmland, especially in the dairying heartland of Ashburton.

Some of the damage will be permanent, says Mid-Canterbury Federated Farmers president David Clark.

Clark said there were two levels of impact: farms all over the region faced silting and water damage and poor utilisation of feed because it is so wet; but then there were the farms adjacent to the rivers which burst their banks.

"They've got all the problems that the other farmers face, but then they've got, in many cases, devastating on-farm damage.

"Some of the damage on these farms will be permanent and some of it will take years to heal," he said.

"We've got sections of river berm that have completely disappeared. Currently we have active rivers running through farmland that need to be put back into their fairways."

Clark said fences and culverts were washed out and laneways damaged. There was a lot of scouring, or shingle and willows from the rivers deposited into paddocks.

Some farms have lost a good portion of their winter feed.

"We have certainly impressed upon the government the need for them to assist district councils and the regional council in repairing roads and rivers.

"We would also hope that there could be some assistance given to removing trees and rocks that came out of the river berms and help to remove them from farms."

"The money will be used for recovery grants, to enable the region's three Rural Support Trusts to provide extra help to farmers, and for other flood assistance where needed.

"We will continue to assess whether further support is required as the full extent of the flooding becomes clearer."

O'Connor said there was widespread flooding and significant damage to property and the road network.

"It's putting further pressure on farmers who have been battling drought and we're committed to helping them get through."

Other recovery measures include an Enhanced Taskforce Green work programme to assist with clean-up and recovery, Rural Assistance Payments to help farmers with essential living costs, and flexibility through the Income Equalisation Scheme.

MPI is working closely with Civil Defence Emergency Management staff, industry groups and others to help with the recovery effort, including the animal welfare response.

"Support is available for farmers who are short of livestock feed, or who have had baleage and fodder crops washed away or damaged by floodwaters," said O'Connor.

Speaking to media at Christchurch Airport after inspecting the damage by helicopter, Prime Minister Jacinda Ardern said there was a big cleanup job ahead.

"From that aerial view you just get a sense of the scale. It is quite devastating in some areas and there's a lot of work for us to do.

Mid-Canterbury farmers David and Kate Acland own Mt Somers Station, near the Ashburton River gorge and the epicentre of the heaviest falls.

Agriculture Minister Damien O’Connor has declared an adverse event for the Canterbury region, unlocking Government support for farmers and growers.