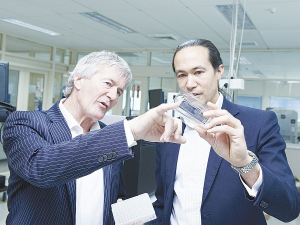 David Chin, who takes over as LIC chief executive next month with Agriculture Minister Damien O’Connor at the co-operative head office.

Chin, currently LIC's general manager operations and service, starts in his new role on January 17. He replaces Wayne McNee who stepped down last week after nearly nine years in the role.

Chin is part of the co-op's senior leadership team, and is responsible for its laboratories, farms and the field teams that deliver services on-farm, including artificial breeding, herd testing and FarmWise consultancy.

He has held other leadership roles at LIC since starting in 2006, including chief transformation officer, key account manager and marketing manager.

Chairman Murray King says Chin is a highly regarded leader at LIC with extensive experience in the business.

"It really is great news for the co-op that we have the depth of talent to appoint from within LIC to provide continuity for the wider team and our farmers," says King.

"David Chin has a natural empathy for people, knows our farmers well and knows the business having led several key strategic initiatives, including overseeing the recent transformation programme."

Chin was heavily involved in the refinement of LIC's strategy earlier this year. The implementation of this strategy will continue to be a key focus for the co-op under his leadership.

King says the board is confident in Chin's leadership, combined with his deep operational knowledge and passion for delivering value to farmers.

Chin says it's "a tremendous privilege" to be the next chief executive of a great company with a critical role in New Zealand's dairy industry, and a great team of dedicated people.

"I've been fortunate to get to know many of these people as well as many of our farmers over the last 15 years and it is truly an honour to be given this opportunity to lead the co-op.

"At the forefront of this will be the ongoing implementation of LIC's refined strategy, which is strongly supported by farmers because it puts them at the heart of everything we do.

"Under that strategy, we have made clear commitments to our farmers in key areas to deliver value to them on-farm, and a key focus for me as CEO will be making sure we are meeting those commitments."

He thanked McNee for his hard work at LIC.

Interim chief executive David Hazlehurst will return to the role of chief financial officer when Chin starts his new role.

Good for the herd, environment

When something looks insurmountable, you need to break it down into manageable pieces for the outcome to be achieved.

Farmer co-operative LIC says its search for a new chief executive has been impacted by current restrictions imposed by Covid-19.