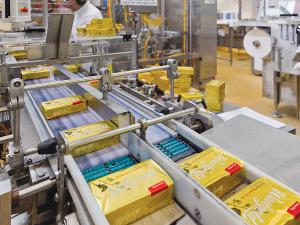 Butter prices have lifted over the last 10 consecutive GDT auctions.

Soaring butter prices may see next season’s milk price go beyond $7/kgMS – even as high as the mid sevens.

With butter up 3.5% at last week’s event, this was its 10th consecutive gain both for butter and the GDT overall, says Penny.

Penny says the butter price may push the 2019/20 milk price above the bank’s current forecast of $7/kgMS. That call was also made by BNZ’s rural economist Doug Steel in mid-March.

Steel now says if today’s prices and currency levels were to persist over the coming season it would equate to a milk price in the mid-$7 area. BNZ’s current forecast for the new season is $6.70/kg, but that includes a view that international product prices drift lower and the New Zealand dollar remains reasonably steady.

But if prices don’t fall from current levels, Steel says the milk price is likely to be higher.

Penny says there has been an abrupt tightening in global milk fat (butter) markets.

“NZ is the largest butter exporter and the sudden slowdown in NZ production has put the squeeze on milk fat markets.

“Indeed, hot and dry weather over late summer and autumn slammed the brakes on NZ production growth. In addition, global milk fat demand is robust. Over the past few years, demand for butter has lifted as the perception that it is ‘unhealthy’ has changed.

“Also, NZ butter has found new markets, with muddy buns one popular product in the now large Chinese butter market. This butter price surge is another indicator of the tightness in global dairy markets.

“Indeed, with NZ production growth now well passed its peak and production offshore already weak, we expect dairy prices to continue to move towards a cyclical peak over 2019.”

Westpac senior economist Anne Boniface says AMF prices are now up 19% since the start of the year and 34% from their November lows. Butter prices have risen an even more impressive 36% this year and are 52% above their November 2018 lows.

“While prices for both are below the record levels they reached in 2017, demand appears to be remaining robust even at these levels,” she says.

“Over time, we would expect the relative prices of milk fat and protein to return to average levels, as manufacturers increase production of whichever products generate better returns (whole milk powder or skim milk powder and fats). That increased supply will put downward pressure on prices, however divergence can persist for an extended period.”

“We think this is some of the supply premium coming out of prices as concern about the impact of dry weather on NZ milk production eases. While soil moisture deficits in parts of the country remain worse than average for this time of the year, they are not as acute as we saw a few weeks ago.”

Prices should be supported by lower global milk supplies so this fall in WMP price is likely to be temporary rather than the start of a longer term trend.

“There is no let-up in demand for the fat based dairy products such as butter and anhydrous milkfat. This demand continues to be driven by global dietary trend back to natural products and the realisation that a little fat in your diet is not necessarily a bad thing.”

Global dairy prices have continued their golden run, with the Global Dairy Trade auction recording its seventh consecutive rise in the price index.