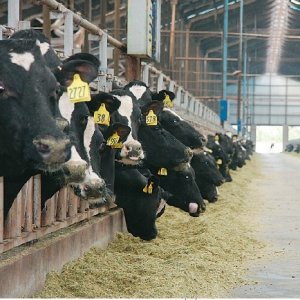 Chief executive Theo Spierings made the announcement at the official opening of Fonterra's second farm in China - called Yutian Farm One.

Speaking at the ceremony, Spierings said China is a significant priority in Fonterra's refreshed global strategy.

"We have a long history in China and we are committed to the further development of the local Chinese dairy industry. We want to establish an integrated milk business in China that processes high quality milk from Chinese farms into dairy nutrition for Chinese customers and consumers," he said.

With consumption in China expected to double by 2020, the country will be consuming more than 70 billion litres of milk every year by 2020.

"It is clear that much of this growth in demand for dairy nutrition will be met from local production.

"An integrated business all starts with a safe, high quality local milk supply. Our intention is to develop separate farming hubs across China, with the ultimate goal of producing up to 1 billion litres of high quality milk every year by 2020."

Fonterra has already committed investment to five farms in the Hebei Province, in the north east of China.

"Our first farm in Tangshan opened in 2007 and today we are celebrating the official opening of our second farm in the area. Yutian Farm One is currently milking around 2200 cows and producing around 11 million litres a year. At full capacity it will reach 30 million litres of high quality milk a year.

"Construction of our third farm, also at Yutian County, is underway and today we are also announcing that we will be investing NZ$100 million (RMB557 million) in a further two farms in the same Province.

"This will mean we will have a hub with five farms within the area. Combined, they will have a herd size of around 15,000 milking cows producing 150 million litres a year and all nearby a large market like Beijing.

"We will be using local suppliers, partners and contractors to build our two new farms and when all five farms are up and running we will be employing around 500 local staff to operate them. This investment will flow right through the local economy."

Spierings said the success of Fonterra's farming operations in China, and their future growth would not be possible without the support of local Government.

"The Government of Yutian County of China has played an integral role in the development of our farms in the region. These partnerships will continue to be vital as we expand our presence in China over the long term and work with local players to further develop the local industry."

Fu Zhenbo, Magistrate of Yutian County said: "Fonterra's investment in dairy farms in the region is helping to further build Yutian's reputation as a key national agriculture demonstration zone. The farm is positive for the future development of Yutian as a dairy farming region.

"Today's announcement of further investment will play a significant role in continuing to develop the security, quality and sustainability of our locally produced milk."