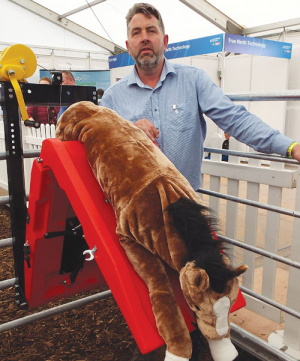 Surgery to fuse four discs in his lower back prompted beef farmer Ger Daly, in County Galway, Ireland, to think again about how to do heavy lifting on his farm.

Calving 120 - 130 beef suckler cows meant that some calvings would need help -- lifting and inverting calves to clear their airways. The age-old option of throwing a calf over a five-bar gate to let gravity clear the airways was no longer an option, so Daly got practical.

He designed the Pro-Revive animal resuscitator, a clever device made from two GRP panels and a steel frame that mounts to a five-bar gate; it could just as easily be fitted to a quad or UTV on a typical Kiwi farm.

In opera,tion the unit is laid flat on the ground, from where the calf is slid onto the platform. Cranking a winch causes the two halves of the unit to pivot around its central hinge, causing the boards to rise, placing the calf in the best position to clear its mouth and airways, with low stress for animal and operator.

Daly recommends using a hand operated air pump at the same time to get oxygen into the animal’s lungs.